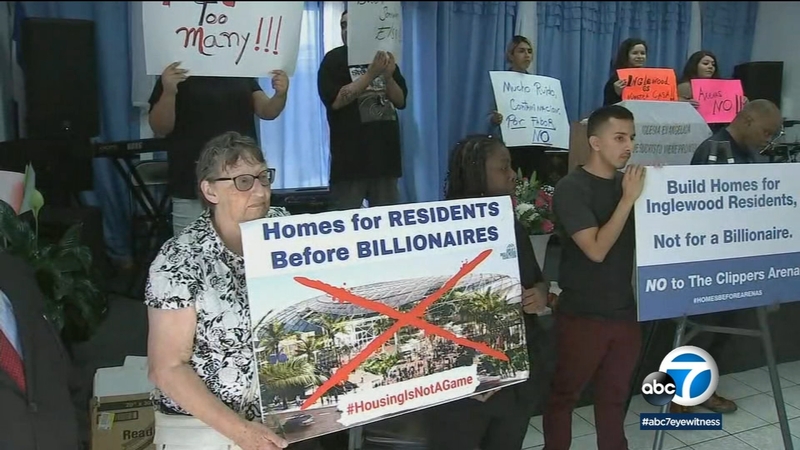 INGLEWOOD, Calif. (KABC) -- Opponents are ramping up the fight against the Los Angeles Clippers' proposed $1 billion arena in Inglewood.

Former Sen. Barbara Boxer joined the effort at a rally on Monday to highlight environmental issues.

The Inglewood residents, organized by the Uplift Inglewood Coalition, are mindful of the David vs. Goliath battle they face.

The Clippers, backed by billionaire owner Steve Ballmer, have picked out a 22-acre Inglewood site for the team's future home. The location is next door to the new planned NFL stadium, under the Los Angeles International Airport flight path.

In court, Ballmer has won key challenges. The city of Inglewood has endorsed the project.

Protesters are getting help from owners of The Forum. They don't want the competition from another arena a mile away.

"We have to make sure they don't get off the hook," she said.

Boxer urged protesters to sign a letter to the California Air Resources Board.

Because of existing pollution in the neighborhood cause by jets, traffic, and soon-to-be football stadium, the Clippers made specific promises written into legislation - in exchange for fast-track environmental review.

"Before they can build, they have to make sure they are doing everything in their power to keep the air clean," Boxer said.

The coalition says the project will bring in an additional 4 million cars a year. They are calling on residents to petition the California Air Resources Board and oust local leaders who approved the project.

And their message to Ballmer: