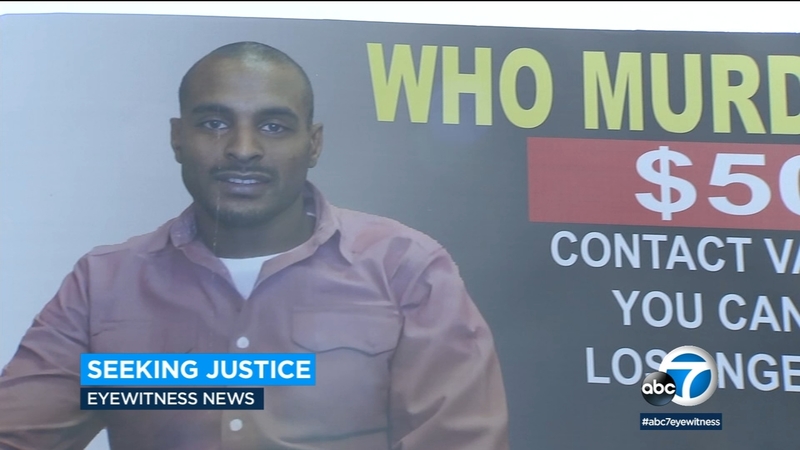 LOS ANGELES (KABC) -- Nathalia Jackson was 5 years old when her father Kenneth Fulks was murdered in 2013.

A billboard with a picture of her father and a number for anyone to call with tips about his murder has been put up in the 10700 block of San Fernando Road in Pacoima.

The city is offering a $50,000 reward for information leading to the arrest and conviction of the victim's killers.

Jackson says the billboard does mean a lot to her family.

It's been a nearly 10-year struggle for the family and detectives working the case, who have failed to come up with any solid leads to identify suspects.

Fulks owned a cellphone business in the 15200 block of Vanowen Street in Van Nuys.

Detectives say the killers somehow gained entry into the business while he was working late the night he was murdered.

LAPD Det. Marc Martinez says Kenny Fulks was forced to the back room of his business and was then shot and killed.

There were certain items taken.

Victim's family says it was not unusual for Fulks to work late nights at times.

The victim's mother, Tina Swayne-Johnson, says they were a small family-owned business. He worked late to do receipts, make sure the orders go out, make sure payments go in.

La Wanda Hawkins is a mother of a murdered child and started the advocacy group Justice for Murdered Children.

She is pleading with the community to help solve the murder of Fulks and the many other unsolved cold-case killings.

"There are a lot of Black and brown people being murdered every day and a lot of our cases do go unsolved," Hawkins said.