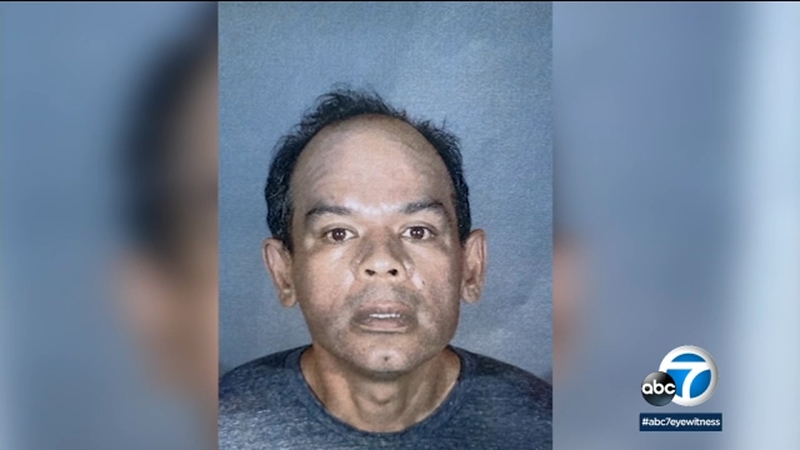 Detective Joe Purcell was one of the first detectives on the scene on Jan. 19, 1996. Mary Lindgren, 67, had been brutally beaten, raped and murdered at a retirement home in Covina.

"In a business where you see bad all day every day, it was really remarkably terrible," Purcell told Eyewitness News. "This was a little old lady... everybody has a mother, it was terrible."

Purcell retired in 2009 but was later hired back to work cold case murders.

"The fact that my mom's case was the first cold case coming up that he would be working, to me was fate, a blessing, godsend. I couldn't ask for a better human being," Don Lindgren said of Detective Purcell. "It stuck with him all these years."

Lindgren returned to the scene of his mother's murder with Eyewitness News the day after her alleged killer, David Bernal, was arrested by Purcell and his team of investigators with LASD.

"I believe he came, probably walked up through here where there's easy access from their parking lot," Lindgren said.

The killer entered Mary's room through a sliding glass door on the first floor of her retirement home. Mary had been weakened by a massive stroke seven years prior to her murder, with no hope of fighting back.

"They really didn't want me to identify or even see the body," Lindgren said. "I couldn't even recognize my own mother. That's how bad somebody beat her and now we know who that somebody is."

For more than two decades, Lindgren, his two sisters and their families wondered who would do such a thing and why.

Over the years, there had been hundreds of leads.

Lindgren prayed at his mother's graveside year after year hoping for the clue that would help Purcell and LASD find her killer.

"We had hundreds of leads that did not pan out, and we left no stone unturned," Purcell said.

This year, while hot on the trail of Mary's killer, LASD faced severe budget cuts. On the chopping block, all but one of the department's 13 cold case detectives. Purcell was off the job, right as they closed in on Mary's alleged killer.

"The combined experience of the unsolved unit detectives is over 500 years, and as of July 1st ,they were dismissed because of budget cuts," LASD Homicide Captain Kent Wegener told Eyewitness News.

"He hasn't been employed here since July 1st ,yet he still comes to work every day to finish this case," Wegener said of Purcell.

"He wasn't getting paid anymore," said Lindgren. "But he stayed on my mom's case and worked it for free."

The lead that cracked the case came with a new search for a DNA match -- familial DNA meant to find a relative of the killer.

Finally, a hit came. Adolpho Bernal, who served prison time for rape, was the father of 46-year-old David Bernal.

"His father had been in prison for a rape charge and so his DNA was in the CODIS database," said Purcell, who credits the department's crime lab for unraveling the science behind the decades-old mystery.

Ultimately, a surveillance team surreptitiously collected a saliva sample from the younger Bernal when he was bringing trash cans back in at his El Monte home. Investigators say it is a match to the DNA collected from Mary Lindgren 24 years ago.

"It really is incredible," said Purcell of the familial DNA testing technique. "It's just changed the face of law enforcement these kinds of sciences. It's stunning, it's remarkable."

Lindgren got the call about Bernal's arrest on Thursday as he was taking sunflowers to his mother's grave.

"A dragon fly came up and landed on the flowers as I was holding them," said Lindgren. "So, to me, that was a sign. Mom knew."

"These cases deserve to be worked and cases do go unsolved, they go stale," Purcell said. "Justice is justice whether it takes five minutes at the scene or 25 years."

David Bernal made his first appearance in court Friday, but his arraignment was delayed and he did not enter a plea.

For Lindgren, his sisters and Mary's three grandchildren, a cloud has been lifted.