"Thrive with Pride Celebration" on ABC7 will honor the LGBTQ+ community.
KABC 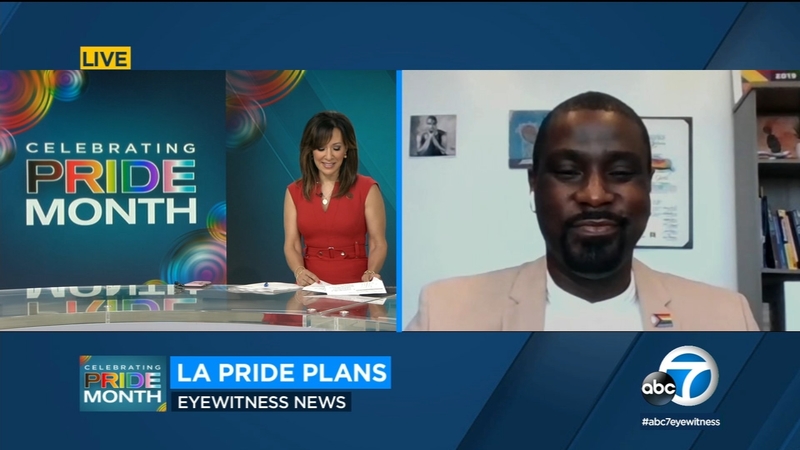 "LA Pride 2021: Thrive with Pride" will feature a month-long combination of events including a special celebration on ABC7.

Throughout June: Pride Makes a Difference

In recognition of the incredibly difficult work Los Angeles social justice and non-profit organizations have put into achieving equity, actionable change and stability, LA Pride will launch a 30-day give back campaign to support these efforts.

"Pride Makes a Difference" will highlight opportunities for Angelenos to sign up to either volunteer, or donate goods and/or money to local organizations in Los Angeles County.

The new program is in conjunction with volunteer organization Big Sunday.

Charli XCX will kick off LA Pride 2021 with a free Thrive with Pride Concert, live streamed exclusively on TikTok from a fabulous LA location on TikTok.

Rounding out the show, up and coming LGBTQ+ artists from across genres will be making their LA Pride concert debuts.

The LA Dodgers have partnered with LA Pride for the fourth time to host the very popular LGBTQ+ Pride Night at Dodger Stadium on Friday, June 11.

To kickstart LA Pride's first in-person event since 2019, an LGBTQ+ artist will sing the National Anthem.

First Responders from the LA LGBTQ+ Community will get a special moment of recognition.

After the game, vaccinated fans will be welcomed onto the field to watch the first Friday Night Fireworks show of the season.

A special event ticket package is available to fully-vaccinated fans that includes a game ticket for the 7:10 p.m. game against the Texas Rangers and an exclusive Dodger Pride-themed t-shirt. Tickets are on sale at dodgers.com/LAPride.

Join us for LGBTQ+ Pride Night at Dodger Stadium on June 11 presented by @BlueShieldCA! Get this exclusive t-shirt when you purchase a ticket at https://t.co/XB73Obh0z4.

After the game, join us for the first Friday Night Fireworks 🎆 of the year! pic.twitter.com/QtBZMDtgLF

ABC7 will air a one-hour primetime special, "Thrive with Pride Celebration," on Saturday, June 12 at 9 p.m.

Plus, we'll have special performances from LGBTQ+ ally and Backstreet Boy AJ McLean and the Gay Men's Chorus of Los Angeles.

Experience a Hollywood theme park take-over with "Pride is Universal".

With your Pride is Universal ticket, begin entering Universal Studios Hollywood at 4 p.m., and mix in with regular park guests to enjoy the theme park during park operating hours.

The park closes to the public at 8 p.m., and you get to stay for the after-hours experience, with musical guests and other surprises to be announced.

The event is a fundraiser for Christopher Street West/LA Pride.

For the first time ever, LA Pride has partnered with the most popular outdoor film organization in Southern California, Cinespia, for their LGBTQ+ Pride Movie Night at the Hollywood Forever Cemetery on Saturday, June 26.

Film title, event details, and tickets will be announced in the coming weeks.

Save the date for a night under the stars with @cinespia and their first-ever LGBTQ+ Movie Night. Event details and ticket info coming soon! ✨ 🍿 🌙 #ThriveWithPride #LAPride #Cinespia pic.twitter.com/7qE21GnLIC