One Gardena resident has painted a number of Dodgers murals across Los Angeles, and with the excitement surrounding the return of baseball, he has plans for many more.
KABC
By Ashley Mackey 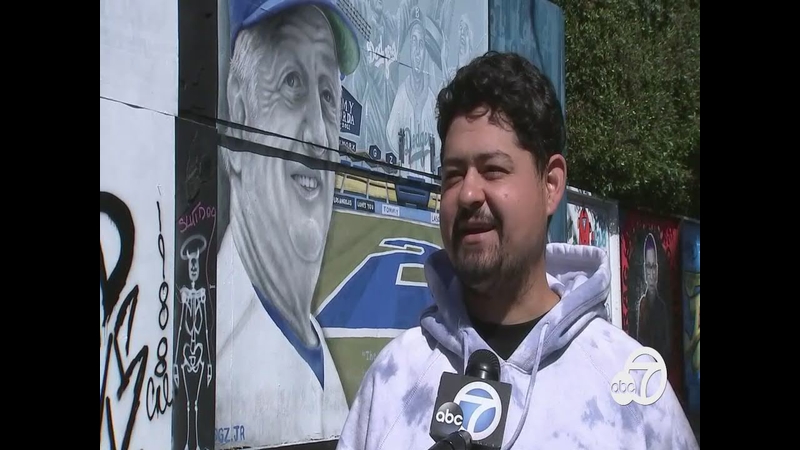 LOS ANGELES (KABC) -- Gustavo Zermeño Jr. is known for his murals all over L.A., including some Los Angeles Dodgers murals. The Gardena resident said he's been going to Dodgers games with his family for as long as he can remember.

"I can remember my mom was taking me to games since I was a little kid," Zermeño Jr. said.

Now, he gets to paint his home team. Zermeño Jr. has painted about eight Dodgers murals around LA, including a tribute mural to Dodgers' legend Tommy Lasorda, which he said was his way of coping.

"He was unique. He was a Dodger, and he bled blue," Zermeño Jr. said. "And I think that's a huge part of his impact in Los Angeles."

After a year of not being able to have fans in the stadium, thanks to revised state guidelines, fans will now be permitted to attend games at Dodger Stadium with new COVID-19 protocols in place, and Zermeño Jr. is excited for the possibility.

"I think it's going to feel weird," Zermeño Jr. said. "It's going to be energizing for sure. You know? Again, it's just being there with all the fans and energy. I think that's going to be cool."

Zermeño Jr. said championship or not, he has plans for many more Dodgers murals for the city.

"Even if they don't win a championship," Zermeño Jr. said. "Throughout this season I want to get a couple up and if they do make it to the World Series, for sure, I'm going to have to go big for that."