Demonstrations were held in Los Angeles and across Southern California on Thursday over the in-custody death of George Floyd.
KABC
By John Gregory, Leanne Suter, Rob Hayes and Marc Cota-Robles
LOS ANGELES (KABC) -- Thousands of people again took to the streets of Southern California Thursday for marches sparked by the in-custody death of George Floyd in Minnesota, and long-simmering frustrations over incidents of police brutality.

There were protests and marches held in front of Mayor Eric Garcetti's house in Hancock Park, Downtown Los Angeles, Santa Clarita, Irvine, Burbank and communities across the region - and across the country - Thursday.

The events were held as family, friends and officials converged in Minneapolis for the first of several memorial services for Floyd.

Celebrities, civil rights activists, politicians and family members of Floyd sang "Amazing Grace," prayed and joined together in a rousing memorial that was both a celebration of his life and a mourning of a man whose death at the hands of police has sparked protests nationwide and calls for an end to racial injustice.
EMBED More News Videos

Thousands of people again took to the streets of Southern California Thursday for marches sparked by the in-custody death of George Floyd in Minnesota, and long-simmering frustrations over incidents of police brutality.

Meanwhile, locally and nationwide, protests continued even as prosecutors in Minnesota announced they are filing charges against the three other Minneapolis officers involved in the arrest that preceded Floyd's death. They are also increasing the charge to second-degree murder for former officer Derek Chauvin, who was seen in a video placing a knee on Floyd's neck for an extended time.

There were no reported incidents of violence or looting in the area, where thousands of demonstrators marched throughout the day and night.

People of all ages and races joined together to condemn police brutality and calling for change after the death of Floyd.

"Everybody's coming together, everybody's giving everybody water, everybody's so nice to each other," Corey Jiannalone said. "It's really been an uplift, amazing thing to experience."

Many also attended a rally later in the evening at Grand Park.

"I think everybody out here is excited, is enthusiastic and is motivated to fight for what we believe in, what we continue to believe in, and that's equality for every single person that's out here," said protester Corey Jiannalone.

Officials did not issue a curfew for Thursday night to allow for the peaceful demonstration to continue.

The ACLU filed a federal lawsuit on Wednesday against the city and county, calling the curfews issued over the past several days unconstitutional.

On Thursday morning, the group Justice L.A. collected roses for victims of violence in the county jail system. The event, which was not described as a protest, began at 8 a.m. at the Hall of Justice in downtown.

Hancock Park:
A large crowd marched from Hollywood to the mayor's official residence in Hancock Park Thursday afternoon. After stopping for a while in front of the mayor's residence, the group went on the move again, marching out to Koreatown and then heading to MacArthur Park.

One of the leaders of the group said he remained in contact with LAPD to let them know where they were headed. He says police offered to safely clear a path for the group.

Among the peaceful group in Hancock Park was a local man who brought his 12-year-old son out to see the event as a teaching moment.

"I wanted him to be out here as part of this peaceful protest to understand his generation needs to be part of the change and less of the problem," said the man, Marcus.

"Our family is obviously very indicative of Los Angeles and a lot of other families here," he added. "I'm half black. It's part of who he is. We're all part of everything. It's important to come out with the same message. It's a beautiful thing but there's still a lot of work left to do."

His son, 12-year-old Derek, was happy to be part of the experience.

"I think it's amazing how everyone comes together to express their voice in a peaceful way," he said.
EMBED More News Videos

Hundreds of people marched peacefully from Hollywood to the mayor's official residence in Hancock Park.

Santa Clarita:
A group of protesters gathered at major intersections to hold signs and peacefully demonstrate in front of the Valencia Town Center. The group was peaceful, occasionally blocking traffic but then retreating back onto the sidewalk to let cars pass.

A group of protesters gathered to hold signs and peacefully demonstrate in front of the Valencia Town Center on Thursday.

One woman who grew up in and lives in Valencia, said she came out to show what the movement means to her.

"We had people coming outside of their cars, who were driving around and stopping traffic to take that minute and realize that our lives matter, our lives matter just as much as your lives," she said. "The fact that we're getting killed in these streets for nothing."

"It's heartbreaking, it's gut-wrenching it's sickening to my stomach. It breaks me down inside. America has had their knees on our necks in every facet of our lives."

Burbank:
Hundreds of people marched in peaceful protest in Burbank, which started at Burbank Police headquarters.

About 500 people could still be seen at the protest around 3 p.m., but appeared to be dispersing.

The peaceful march took place with an escort by Burbank police, making its way past Burbank High School and ending at McCambridge Park near 3rd Street and Amherst Drive.

The demonstrations across the Southland on Thursday were as scheduled:

A handful of vigils were also held:

Protests remain mainly calm Wednesday as some demonstrations locally and nationwide have attracted looters and vandals. Many law enforcement agencies have stated that much of the violence and destruction was at the hands of opportunists seeking to capitalize on the protests that are calling for an end to police brutality and injustice against African Americans. 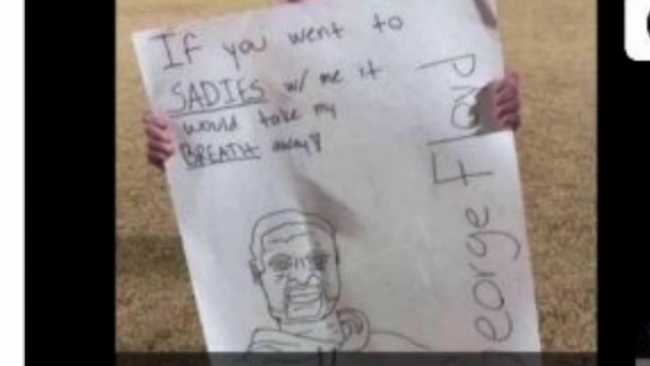 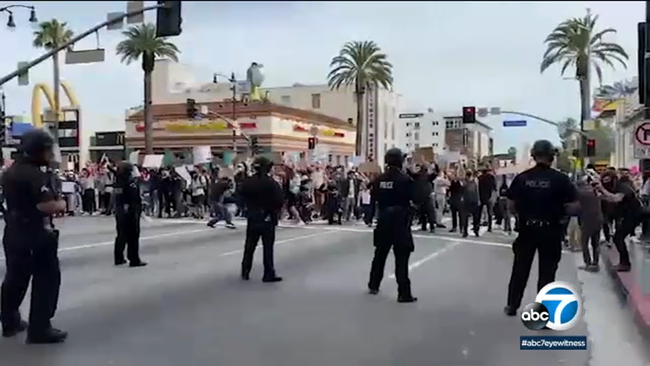 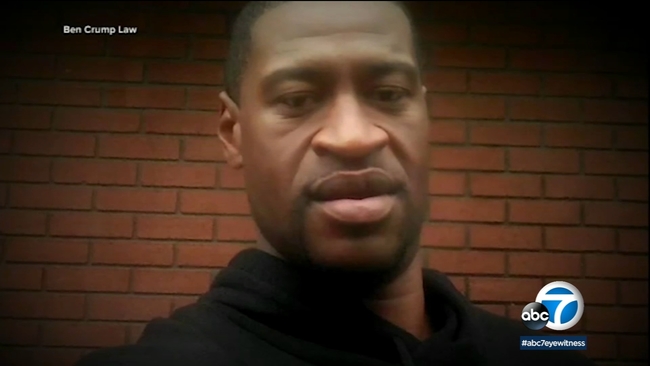