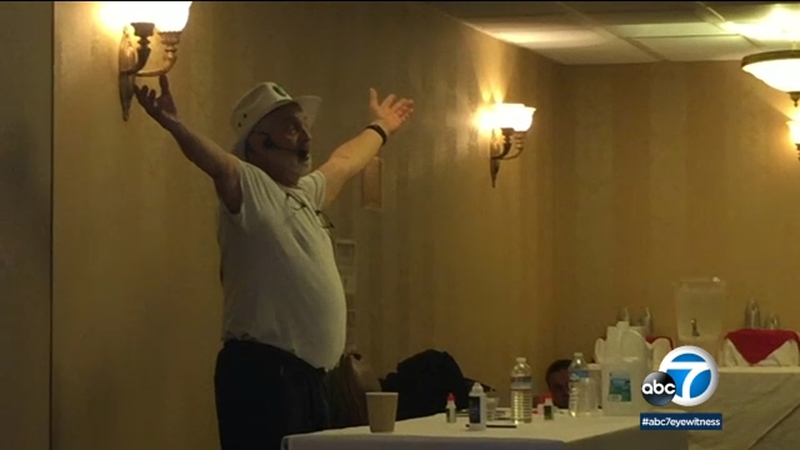 Bogus cures for the coronavirus are popping up all over, but one of the oddest might be from a so-called "church" Eyewitness News began to investigate back in 2016.

The "Genesis 2 Church of Health and Healing" considers a form of bleach its sacrament and has for years touted "Miracle Mineral Solution," or MMS, as a cure-all for everything from HIV to cancer, autism and even the common cold. Now, the church claims to be curing the coronavirus.

"The coronavirus is curable," says Archbishop Mark Grenon in a recent video. "Do you believe it? You better!"

"Every week I'm putting in the G2 sacramental dosing for coronavirus," says Grenon. "Six drops MMS activated, four ounces of water... small children we cut everything in half."

But MMS is made up of potentially toxic chemicals, including sodium chlorite. The FDA has warned for years that when mixed with citric acid, it becomes chlorine dioxide and is the same thing as drinking bleach.

"There is no miracle here, this is basic bleach and it's a bad idea," says Dr. Mark Morocco of the UCLA Ronald Reagan Medical Center.

Dr. Morocco is screening and treating patients for coronavirus every day. He says it's no surprise that con artists are trying to take advantage of the pandemic.

"Sort of like predators who come out when they smell blood in the water," says Dr. Morocco. "We are here to tell you what you can do and not do to lessen that anxiety and to prevent yourself from being injured by some of these, frankly, snake oil quack, crazy things that are popping up online."

MMS first came to the attention of Eyewitness News after a Southern California man lost his wife after she ingested a few drops of an MMS product made by a company called Project Greenlife while the couple was sailing around the world. Sylvia Nash, 56, began to fill ill shortly after taking the MMS and progressively got worse over the course of a day before dying in the arms of her husband in 2009.

"The vision of her face, just inches from mine, and those eyes suddenly de-focusing on mine," said Doug Nash. "That'll haunt me for the rest of my life."

Nash, a former mayor of San Clemente, reported his concerns to the FDA and is convinced MMS caused her death, but doctors who performed her autopsy could not determine an official cause of death.

Eyewitness News attended a seminar for the "Genesis 2 Church" at a hotel in Costa Mesa in 2016.

"Yeah, I've got people we're curing of major stuff just from that," Grenon told a group of believers at the Ayres Hotel. "You can sell them anything - just tell them Jesus heals you while you drink this!"

The FDA issued a new warning to the fringe church this week, calling its chlorine dioxide products "fraudulent and harmful" and giving them 48 hours to remove their claims from the internet. The FDA is documenting adverse reactions to MMS, including respiratory failure, liver failure, severe vomiting and severe diarrhea.

In a recent online interview with a Denmark outlet called the "Age of Truth," Grenon was asked about his claim that the coronavirus was man-made.

"Yes, on purpose," Grenon said. "To depopulate the world."

In another broadcast, Grenon told his followers, "I think they're spraying it and adding it to the chemtrails... of course, kill all the old people - they're weak. You don't have to pay them any more welfare."

The FDA is also warning the founder of the "Genesis 2 Church," Jim Humble, a former Scientologist who has claimed he's a billion-year-old God from the Andromeda Galaxy.

"And then I was asked to be put in the part of the space Navy that watched over the earth," Humble has told his followers.

Humble, who now appears to be living in the Dominican Republic, had this response to the FDA's new warning.

"Well, I have a report here from the FDA," says Humble. "That's so ridiculous, it doesn't make any sense whatsoever."

"They keep talking about how poisonous chlorine dioxide is, but in small amounts it's not poisonous at all," he says in the video.

An Eyewitness News producer reached out to Humble and Grenon last week about their claims to cure the coronavirus. Neither responded, but Grenon had this to say in a video posted on Sunday.

"It's all hysteria right now. We're curing this in one to three days. Cure, yeah Lisa, cure yeah!"

Eyewitness News producer Lisa Bartley was "ordained" as a minister after attending that Genesis 2 seminar in 2016, but was later told she'd been "excommunicated."

"So, if you're listening Lisa Bartley, listen, listen to what I'm saying," Grenon said in his latest video. "You're gonna wake up one day in hell if you don't listen to the truth."

Dr. Morocco at UCLA tells Eyewitness News, he hopes that people will ignore the nonsense from fraudsters hoping to capitalize on fear of the coronavirus.