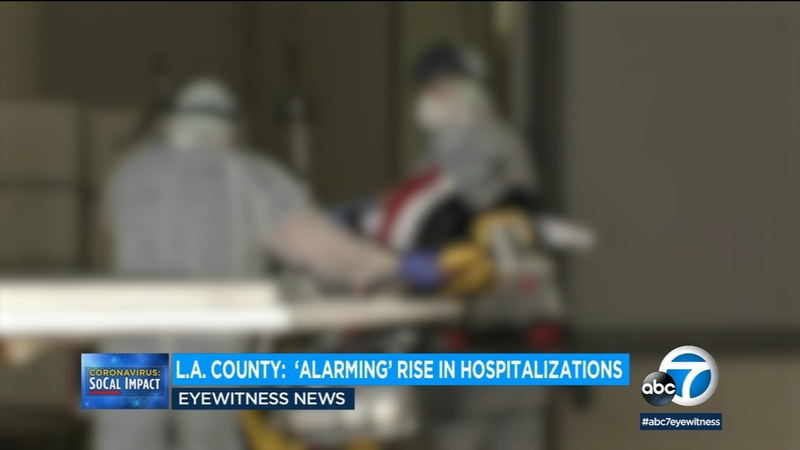 At the same time, the number of COVID-19 patients in the ICU is up 35% in the last two weeks, according to the Los Angeles Times.

Meanwhile, county health officials are expected to resume daily coronavirus updates on Monday following a break during the holiday weekend to implement improvements to its data processing systems.

Officials with the county's Department of Public Health said the improvements are beginning earlier than expected, but there is no reason to question the accuracy of previously released data, Jesus Ruiz, spokesman for the county's COVID-19 Emergency Operations Center, told City News Service on Friday.

As of Thursday, the last day new figures were released, 55 additional deaths due to the coronavirus were reported, along with 2,204 newly confirmed cases -- it was the fifth consecutive day that new cases exceeded 2,000.

The county health officials reported that 1,893 people were hospitalized in the county as of Thursday. That figure excludes patients in Long Beach and Pasadena, which have their own health departments.

The figure is up slightly from 1,889 on Wednesday, and continues an upward trend that began last week, when the number was closer to 1,300. It also echoes statewide figures, with Gov. Gavin Newsom announcing Thursday that hospitalizations across the state had increased by 56% in the past two weeks.

The overall percentage of people testing positive for the virus in the county remained at about 9%. County health officials said Wednesday the daily average of positive tests over the past seven days was 8.4%, up from about 5.8% two weeks ago.

Los Angeles County officials on Wednesday issued a revised health order to come into compliance with requirements announced earlier in the day by Newsom. The governor ordered the closure of many indoor business operations, most notably eliminating indoor dine-in service at restaurants. Also barred were indoor activities at museums, zoos, aquariums and card rooms.

Those restrictions will be in effect for at least three weeks, Newsom said.