Coronaviruses cases confirmed in all 50 states; US death toll surpasses 100 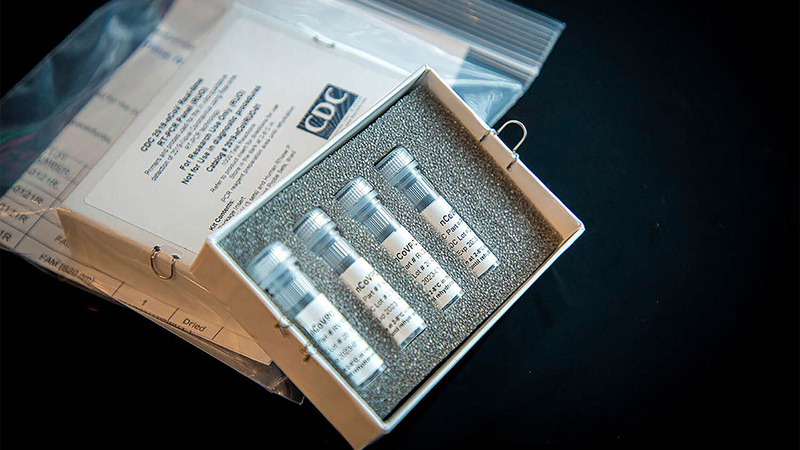 Mass disruptions shuddered across the globe Tuesday as governments struggled to slow the spread of the coronavirus while also trying to keep their economies afloat. The chaos stretched from Lithuania, where border traffic jams were 40 miles deep, to Detroit, where bus service came to a sudden stop when drivers didn't show up for work.

European Union leaders, meanwhile, agreed to shut down the bloc's external borders for 30 days. In the United States, West Virginia became the last state to report a case of the disease, confirming that it has spread nationwide.

Increasingly worried about the economic fallout of the global shutdown, the U.S., Britain and the Netherlands also announced rescue packages totaling hundreds of billions of dollars, while Venezuela - long a fierce critic of the International Monetary Fund - asked the institution for a $5 billion loan.

But it was everyday people who suffered most.

Miguel Aguirre, his wife and two children were the only people on a normally bustling street near San Francisco's City Hall, one day after officials in six San Francisco Bay Area counties issued a "shelter-in-place" order that requires most residents to stay inside and venture out only for food, medicine or exercise for three weeks - the most sweeping lockdown in the U.S. against the outbreak. On Tuesday morning, only two coffee shops on the street were open. Both were empty.

Aguirre said he and his wife, both janitors at a Boys and Girls Club, had heard about the order on TV, but decided to show up to work anyway because they need the money. His supervisor texted him that he should leave.

"If we don't work, we don't eat," said Aguirre, who brought his two daughters with him because schools were shuttered. He had already lost his second job, at a hotel, when tourism conferences began canceling a month ago.

"There been days when I want to cry, but I have to keep going," Aguirre said.

In Brussels, meanwhile, Ursula von der Leyen, the European Commission president, said there had been "a unanimous and united approach," to the decision to prohibit most foreigners from entering the EU for 30 days.

German Chancellor Angela Merkel said European leaders had agreed in a conference call to the Commission's proposal for an entry ban to the bloc - along with Norway, Switzerland, Iceland and Britain - with "very, very limited exceptions." Germany will implement the decision immediately.

But the countries also agreed on the need to ensure continued cross-border travel for commuters, she said.

There will be "grave, very grave consequences" for European economies from the outbreak, she said, one reason to safeguard the flow of goods.

On Monday, the EU issued guidelines aimed at facilitating the flow of critical goods like food and medicine, while helping individual nations restrict non-essential travel.

But on Tuesday it was chaos on many borders with traffic backed up for dozens of kilometers (miles).

"We are all desperate, cold and sleepless here for a third day," said Janina Stukiene, who was stuck in Lithuania on the border with Poland with her husband and son. "We just want to go home."

The line of cars and trucks in Lithuania was some 60 kilometers (37 miles) long after Poland closed its border, while similar traffic jams could be seen on the borders with Germany and the Czech Republic.

French President Emmanuel Macron, meanwhile, tightened internal guidelines, allowing people to leave home only to buy food, go to work or do essential tasks, saying that people hadn't complied with earlier guidelines and "we are at war."

In Italy, reported infections jumped to 27,980. With 2,503 deaths, Italy now accounts for a third of the global death toll.

Spain, now the fourth-most infected country, saw the number of people with the virus rise by more than 2,000 in one day to 11,178 and virus-related deaths jump by almost 200 to 491. Only China, Italy and Iran had more infections.

With the number of cases worldwide topping 190,000, a surge of patients in Madrid's hospitals has fueled worries in Europe and elsewhere of what lies ahead.

The virus causes only mild or moderate symptoms, such as fever and cough, for most people, but severe illness is more likely in the elderly and people with existing health problems. COVID-19 has killed over 7,300 people so far, while more than 80,000 have recovered.

Some bright spots emerged. Wuhan, the central Chinese city where the virus was first detected late last year and which has been under lockdown for weeks, reported just one new case Tuesday.

In the world's volatile financial markets, shares reversed early losses in Asia on Tuesday and stocks pushed higher on Wall Street - one day after their worst plunge in more than three decades - as more aid appeared on the way from Washington. Still, a growing number of traders see a recession likely, if not already here.

The White House proposed a roughly $850 billion rescue package - a sweeping stimulus not seen since the Great Recession of 2008 - and called for its rapid approval. It would provide relief for small businesses, $50 billion for the airline industry and a big tax cut for wage-earners, said two people familiar with the request who described it on the condition of anonymity because they weren't authorized to speak publicly.

"If we do this right, our country and the world, frankly, but our country can be rolling again pretty quickly," President Donald Trump said at a press conference.

In Britain, the government unveiled a massive economic support package. Prime Minister Boris Johnson said his government will "act like any wartime government and do whatever it takes to support the economy."

Among the measures, Treasury chief Rishi Sunak said the government would provide 330 billion pounds ($405 billion) worth of government-backed loans and guarantees for small and large businesses.

The Dutch government also announced a multibillion-euro (dollar) series of measures to prop up businesses and workers. The support package includes paying up to 90% of the salaries at businesses hit by the virus for the next three months and financial support for the self-employed.

Finance Minister Wopke Hoekstra said "many billions are available to save jobs and keep businesses afloat."

In the U.S., officials urged older Americans and those with chronic health conditions to stay home, and recommended all group gatherings be capped at 10 people.

The virus has roiled U.S. primary elections Tuesday in four states. Ohio called off the vote hours before polls were to open but voting went on in Illinois, Arizona and Florida.

Problems popped up across the country, including in Florida, which has the most delegates up for grabs. In one county, two dozen poll workers dropped out, leaving Elections Supervisor Paul Lux's staff scrambling to train replacements.

"We are at the honest end of the rope," Lux said.

The big question Tuesday was whether coronavirus would affect turnout.

New York City's mayor warned Tuesday that residents should be prepared for the possibility of a shelter-in-place order within days. Mayor Bill de Blasio said no decision had been made yet, but he wants city and state officials to make a decision within 48 hours, given the fast spread of the virus.

Some countries that had resisted more stringent measures snapped into action, too.

In Britain, Johnson told people to eliminate unnecessary contact with others, work from home where possible and avoid bars, restaurants, theaters and other venues. Schools remained open for the time being.

Some scientists, and many worried Britons, have said the government should have taken tough action sooner.

Britain's dramatic escalation of restrictions was sparked by new scientific evidence suggesting that 250,000 people in the U.K. and more than 1 million in the U.S. might die if the country did not suppress its spread.

The analysis, published by Imperial College London, drew on the latest data from China and Italy. It found that a strategy of "mitigation" - slowing but not stopping the spread of the virus while protecting vulnerable groups like the elderly - would still lead to a huge number of cases that would overwhelm the health care system.

Health officials say that "social distancing" - encouraging people to avoid close contact with others - is a key to slow the spread of the virus and keep U.S. hospitals from being overwhelmed with a sudden deluge of patients.

In Detroit, bus riders were stranded Tuesday after most drivers didn't report to work, apparently concerned about the spread of the virus and confused as to whether Michigan's new restrictions on gatherings included vehicles loaded with commuters.

The city canceled bus service shortly after 8 a.m. because of the shortage of drivers. Surprised riders waiting at stops across the city pulled out phones to try to get a lift from friends or family.