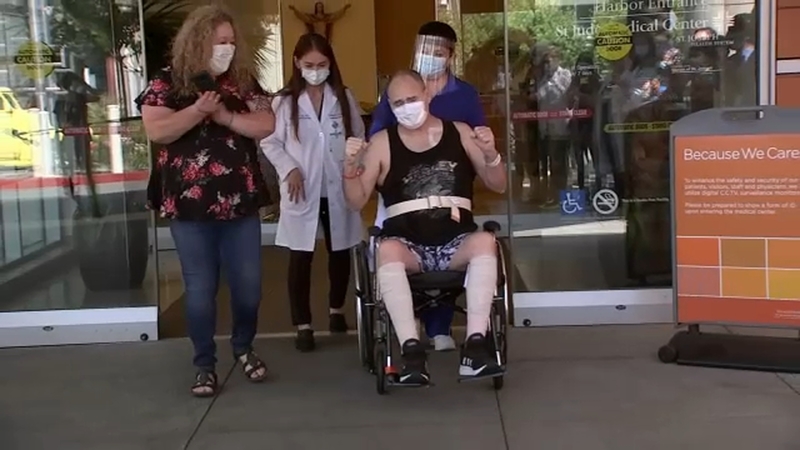 COVID-19 survivor in OC warns those not cautious of virus

FULLERTON, Calif. (KABC) -- After battling COVID-19 for nearly three months and doctors estimating his chances of survival at less than 5%, David March was going home.

"I thank everybody at St. Jude. They're awesome," March said.

Eyewitness News first introduced you to March after he was taken off a ventilator not feeling like himself.

"I remember the first thing after I came out, I grabbed my chin and my goatee was gone," March said.

Joan Strydom was the ICU nurse behind that clean shave.

"I never had a voice. He never spoke while I took care of him and it's just nice to put a face and voice to a man that was so sick and is doing so much better," Strydom said.

Doctor of Physical Therapy Sara Ciallella said March still had a lot of work ahead of him before he could go back to fishing, bowling and riding his Harley.

"We always say it can be six months to a year before you feel like you're at your normal again. That's what we'll tell many of our patients and just considering he was down for three months, it could be even longer before he really regains his strength again," Ciallella said.

The COVID-19 survivor used his experience to warn those not protecting themselves.

"Just people that aren't being smart-they're not wearing masks. They're not social distancing. You know, you all have to think about it to protect yourselves 'cause you can catch it, don't even know it and then you pass it on to your loved ones. The older parents, grandparents and if they get it, they're not going to make it," March said.

Eighty-four days away from home, too long for his partner of more than three decades, Ronna March.

"You know, that's the longest we've ever been apart," Ronna said.

March was left looking forward to one thing.

"Just being home with my family," March said.

A GoFundMe page has been set up for March.