Every resident of Los Angeles County will be eligible for a free coronavirus test, regardless of symptoms, at testing sites that have been set up throughout the city, Mayor Garcetti announced Wednesday.
KABC
By John Gregory and ABC7.com staff 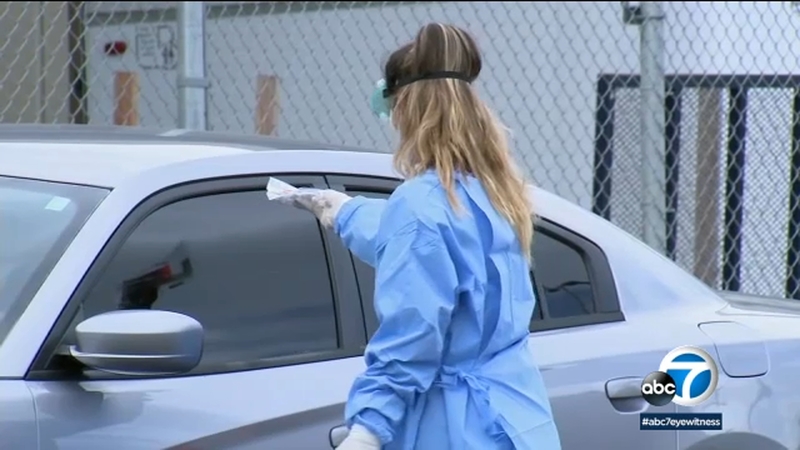 LOS ANGELES (KABC) -- Every resident of Los Angeles County will be eligible for a free coronavirus test, regardless of symptoms, at testing sites within the city of Los Angeles, Mayor Eric Garcetti announced Wednesday.

Prior to the mayor's announcement, testing at the drive-thru sites set up around Los Angeles city and county had been restricted to individuals who were presenting symptoms of COVID-19, or critical front-line workers like grocery store employees and rideshare drivers who were not presenting symptoms.

"Tonight, I am proud to announce that Los Angeles will become the first major city in America to offer wide-scale testing to all of its residents, with or without symptoms," Garcetti said during his Wednesday daily briefing.

The tests for people without symptoms will be available at eight testing sites within the city of Los Angeles and are open to all county residents.

Testing sign-up information is available here. Tests can usually be scheduled for the same day or the next day, but an appointment is needed. Priority is still offered for front-line workers and people presenting symptoms.

Announcing that L.A. is now the first major city in America to offer free COVID-19 testing to all residents. While priority will still be given to those with symptoms, individuals without symptoms can also be tested. Sign up at https://t.co/rHWABmXUEl. pic.twitter.com/TYqo6Bzwxe

The mayor emphasized that the expanded testing is one step to get the city back to "normal."

"As long as this disease spreads, we have to continue to scale. And as long as this disease takes lives, we must test," Garcetti said. "We know that coronavirus is a silent killer that moves quietly through the population, and many of the people who transmit the disease -- this is why it is so deadly -- don't know that they have it. This is why making testing available to anyone who wants it is essential."

The county and city have steadily increased their number of sites and daily testing capacity since they opened more than a month ago. The 34 sites can now conduct 18,000 tests a day. Over the past month, they have conducted 140,000 tests.

"We have the capacity," Garcetti said. "So don't wait, don't wonder and don't risk infecting others."

Testing will also be expanded among the homeless population and at nursing homes, which have been a hotspot for the virus.