Just over half of Americans plan to get coronavirus vaccine as soon as it's available, survey finds

The country is moving closer to a COVID-19 vaccine, but Americans seem to have a wait-and-see mentality about receiving it.
KABC
By Lisa Bartley Half of Americans plan to get COVID-19 vaccine ASAP, survey finds

LOS ANGELES (KABC) -- As the U.S. moves closer to authorizing emergency use of a coronavirus vaccine, surveys show Americans are hesitant about being among the first to receive it.

In documents released Tuesday, the Food and Drug Administration indicated Pfizer's COVID-19 vaccine had met the criteria required to prove the vaccine was safe and effective.

A panel of experts will further review the company's application for emergency authorization during an FDA scheduled hearing Thursday.

The FDA is also set to consider a separate vaccine being developed by Moderna.

Meanwhile, surveys show Americans have ongoing questions about the safety of a coronavirus vaccine.

A survey released in late November by Langer Research Associates and conducted by the Societal Experts Action Network found just over one out of two Americans intended to obtain a coronavirus vaccine as soon as it became available.

A large number of Americans indicated a wait-and-see mentality about obtaining the vaccine.

"It's a little hard having trust on if it will work," said Laura Jauregui, a Los Angeles area mom and marathoner considering whether the vaccine is safe for herself and her family. 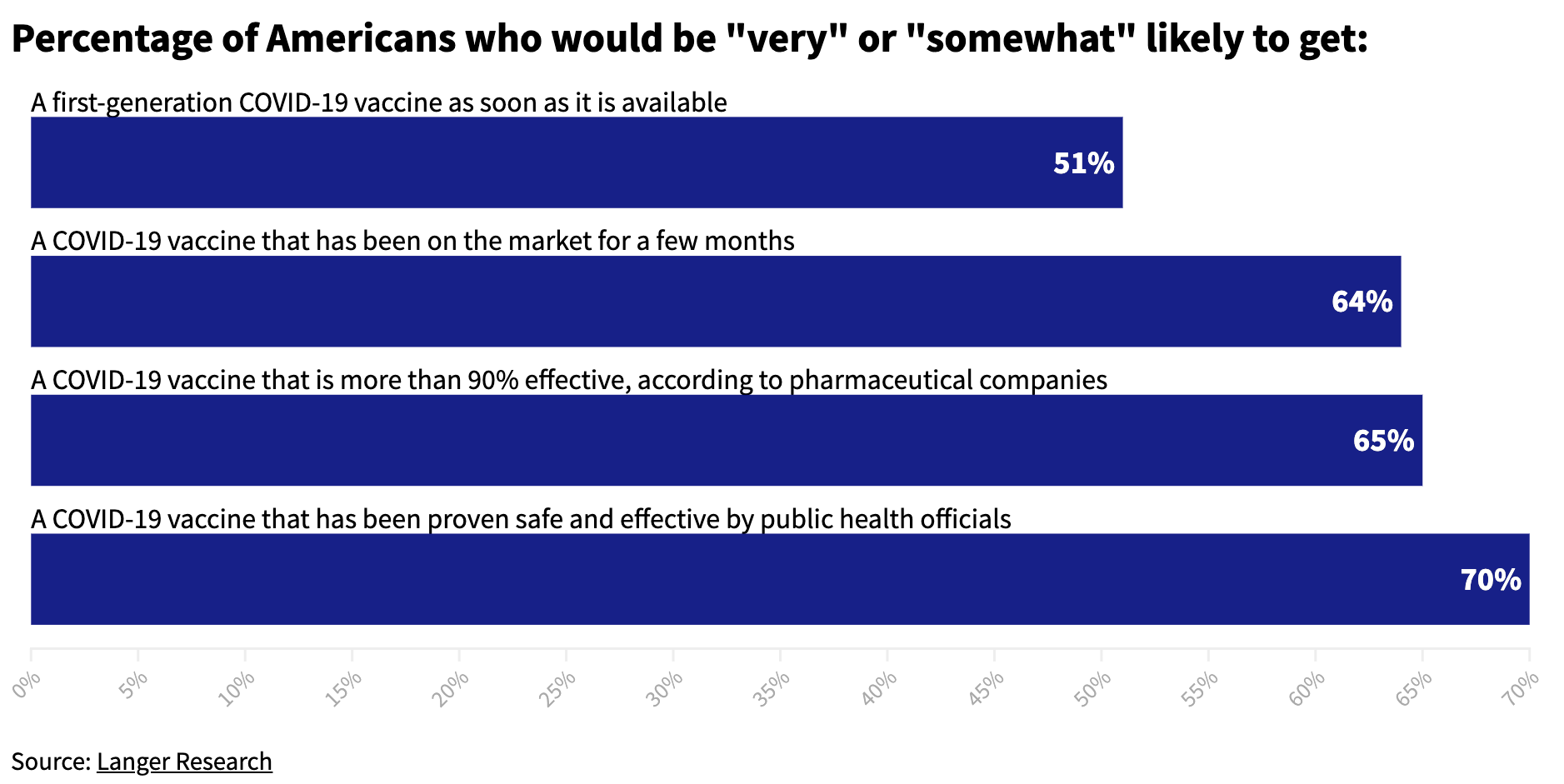 Ultimately, Jauregui said she believes she will get the vaccine.

Irma Moyao, another Los Angeles area mom and Jauregui's running partner, expressed more concerns about the vaccine for herself and her family.

"I don't think we are ready for it. I need to learn more about it, see the side effects of it, the results of it," Moyao said. "If it is up to me, I would like to wait at least a year before I do it."

"Everyone wants a vaccine and then everyone I hear, 'Well, I don't want it because it's rushed,'" lamented hairdresser Amanda Clarke Cohn.

Eyewitness News found hesitance around vaccines is nothing new.

Roughly four years ago, California eliminated religious exemptions for vaccines to increase the number of school-aged children getting immunized for measles, mumps and rubella.

Outside of medical exemptions, the MMR vaccine is required for school-aged children.

In the 2018-2019 school year, 96.5% of kindergartners had received the vaccine statewide, according to the California Department of Public Health.

When a vaccine is not required, acceptance of it is much lower. According to the Centers for Disease Control and Prevention, less than one out of two adults in California received the flu shot last year.

"It's reasonable to question things," said Dr. Anne Rimoin, an infectious disease expert and professor at the UCLA Fielding School of Public Health. "What's really important for people to understand is that vaccines go through very rigorous testing protocols. Vaccines are very safe."

Dr. Rimoin said while she understands the concerns Americans have behind something, she also hopes the public will trust the science behind the vaccine so that the country can achieve something called "herd immunity" from the coronavirus and pull out of this pandemic.

Right now, one person infected with COVID-19 can pass the virus onto a lot of people because so many people are not immune to it.

But, if a large number of people were vaccinated and therefore immune from the virus, it would be much harder for the disease to spread, according to medical experts. That is the concept behind herd immunity.