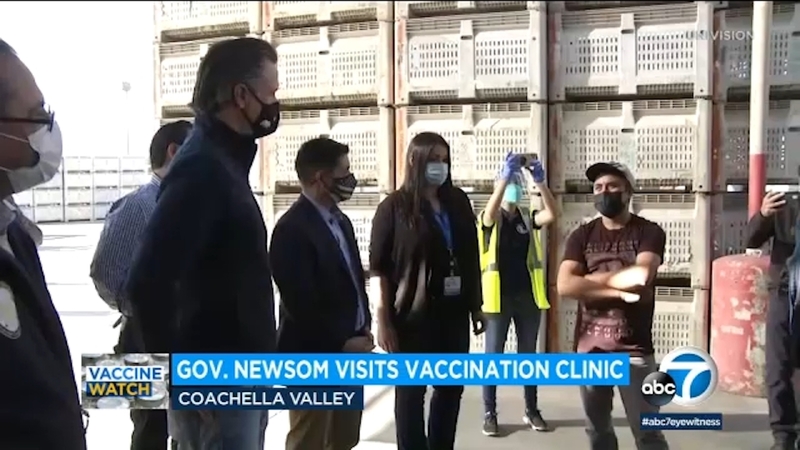 COACHELLA, Calif. (KABC) -- Gov. Gavin Newsom and state lawmakers have worked out a multibillion-dollar COVID-19 relief package that will offer $600 payments to low-income families and undocumented immigrants as well as support for farmworkers and small businesses.

It also creates a $24 million fund to help workers at farms and food processing plants with temporary hotel stays if they have been exposed to the coronavirus and have no other place to isolate themselves.

Who is eligible for payments?

The deal provides payments to about 5.7 million low-income Californians. That includes $600 payments to households that earn an income under $30,000 and are eligible for the state's Earned Income Tax Credit.

It also includes undocumented immigrants in California, who were excluded from the federal stimulus payments that were made during the Trump administration.

The governor's office says households that use an Individual Tax Identification Number to file their taxes and have income below $75,000 will be eligible for $600 payments.

An ITIN is used for filing taxes by those who cannot obtain a Social Security Number, generally undocumented immigrants. Others who are eligible include foreign nationals who earn income from owning a U.S.-based business and foreign students.

That group was excluded from stimulus payments of $1,200 and $600 made by the federal government during the pandemic.

The payments would be made to households after they file their 2020 taxes.

The deal also provides $600 payments to households enrolled in the CalWORKS program and recipients of SSI/SSP and Cash Assistance Program for Immigrants (CAPI).

Lawmakers are expected to vote on the package by next week.

The state is vaccinating 1.5 million people a week on average, regardless of immigration status.

Speaking with farm workers in the Coachella Valley, Newsom said the state has the capacity to vaccinate 4 million people a week, but simply doesn't have enough supply coming in from manufacturers.

In Los Angeles County, about 1.5 million doses have been administered, representing about 14.6% of the state's eligible population 16 and over.

This is happening even as the number of new cases the state sees every day has been declining since the peak of the January surge.

Locally, the battle to reopen schools remains at a standstill. While the Los Angeles County health department said declining case rates mean elementary schools can reopen with the appropriate waivers and safety plan, Los Angeles Unified and its teachers union aren't budging on the need to vaccinate teachers first.

"As difficult as the decision was to close school classrooms, reopening is harder," said LAUSD Superintendent Austin Beutner.

It's been almost a year since distance learning began for Los Angeles County students.

On Wednesday, LAUSD announced a partnership with the Los Angeles Rams and Hollywood Park to create a vaccination site for Los Angeles County school staffers that would have the capacity to vaccinate up to 10,000 people a day, if the supplies are available.
Report a correction or typo
Related topics:
health & fitnesscoachellacaliforniagavin newsomcoronavirus californiacoronaviruscovid 19 vaccinecovid 19
Copyright © 2022 KABC Television, LLC. All rights reserved.
TOP STORIES
LA County could hit 'high' COVID level in July, prompt return of masks
Here's what to know about the end of CA's eviction moratorium
California late start law aims to make school less of a yawn
LAX expected to be second busiest US airport over July 4th weekend
Woman searching for brother reported missing in Redondo Beach
Lawyer: Nipsey Hussle lifted up neighborhood he was gunned down in
Apple's newest CarPlay feature will make buying gas easier
Show More
How to save money when buying a new car in an inflated market
Orange County confirms 1st presumptive case of monkeypox
OC woman attacked and sexually battered inside Irvine storage facility
Silver Lake restaurant offers free food in exchange for Sriracha
USC, UCLA moving from Pac-12 to Big Ten in 2024
More TOP STORIES News