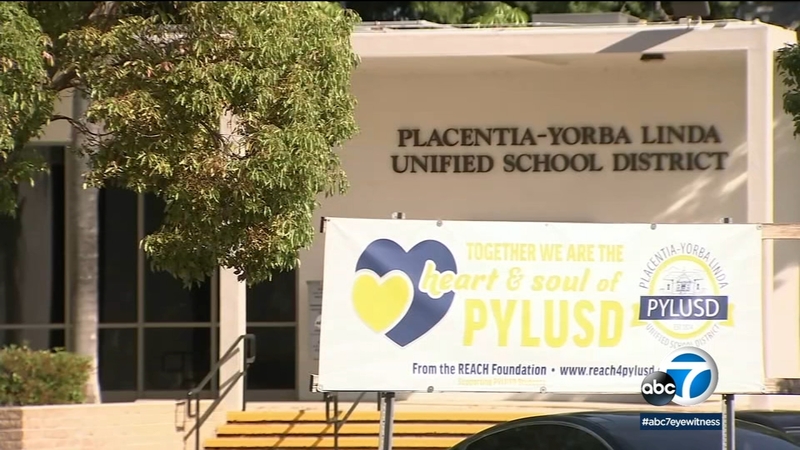 PLACENTIA, Calif. (KABC) -- The Placentia-Yorba Linda School Board has voted to ban the teaching of critical race theory in its classrooms.

On Wednesday evening, the board made some changes to the ban before passing it by a vote of 3-2.

One change was aimed at convincing the College Board to keep its Advance Placement designation on some courses, even if certain topics are not allowed to be discussed.

The ban does not specify what would happen if a teacher were to violate the policy.

The district is the first in Orange County to pass such a rule.

Critical race theory is a way of thinking about America's history through the lens of racism. Scholars developed it during the 1970s and 1980s in response to what they viewed as a lack of racial progress following the civil rights legislation of the 1960s.

It centers on the idea that racism is systemic in the nation's institutions and that they function to maintain the dominance of white people in society.

The architects of the theory argue that the United States was founded on the theft of land and labor and that federal law has preserved the unequal treatment of people on the basis of race. Proponents also believe race is culturally invented, not biological.

Many Republicans view the concepts underlying critical race theory as an effort to rewrite American history and convince white people that they are inherently racist and should feel guilty because of their advantages.

But the theory also has become somewhat of a catchall phrase to describe racial concepts some conservatives find objectionable, such as white privilege, systemic inequality and inherent bias.

Leandra Blades, a member on the board of education, said Thursday in an interview with Eyewitness News that she made good on her campaign promise by voting to ban critical race theory, also referred to as CRT.

"I campaigned on banning critical race theory and keeping a lot of social justice issues, and kinda just the outside noise, out of school and returning to traditional curriculum," Blades said.

Tyrone Howard, a professor of education at UCLA, said CRT is typically a graduate level course and after studying hundreds of school districts across the nation, he has yet to see it taught at the K-12 level.

"It looks at the impact that race has on legal opportunities and legal fairness," Howard explained.

Howard said there are much greater issues around racism to tackle in our nation's education system.

"We can ban critical race theory, but when are we going to ban the critical discrepancies that exist in schools across this country where Black and brown children continue to not get the same opportunities as their white counterparts?" Howard said.

Howard said the growing movement across the nation is an attempt at erasure of racial injustices in the nation's past and present.

Blades argued the vote changes nothing -- teachers are still expected to stick to the curriculum.

"Everything has stayed the same and it's just saying, in your supplemental curriculum and the way that teachers are teaching, we need to teach what is geared towards our district curriculum and not through a critical race theory lens, which many believe is through a racist lens," Blades said.

Blades has faced criticism for attending a rally outside the Capitol on Jan. 6, 2021 -- the day of the insurrection.

Some at Tuesday's meeting accused the trustee of allowing her politics to influence her board decisions.

"I didn't enter the Capitol. Nothing happened, but I went there because I was a supporter for President Trump and I went to see him at what could've been the last speech that he ever gave and I'm not ashamed of doing that," Blades said. "So my politics play no role in my decisions. I'm doing what I was elected to do and I'm doing what my constituents want."

In an email Thursday, a district spokesperson told Eyewitness News that critical race theory was not taught at PYLUSD, nor was it part of the curriculum and Blades' opinions are her own.