Cryptocurrency is booming, but what are the risks? Here's what you should know

Some financial experts say though cryptocurrencies are a hot trend, they're still quite risky.
KABC
By Carlos Granda 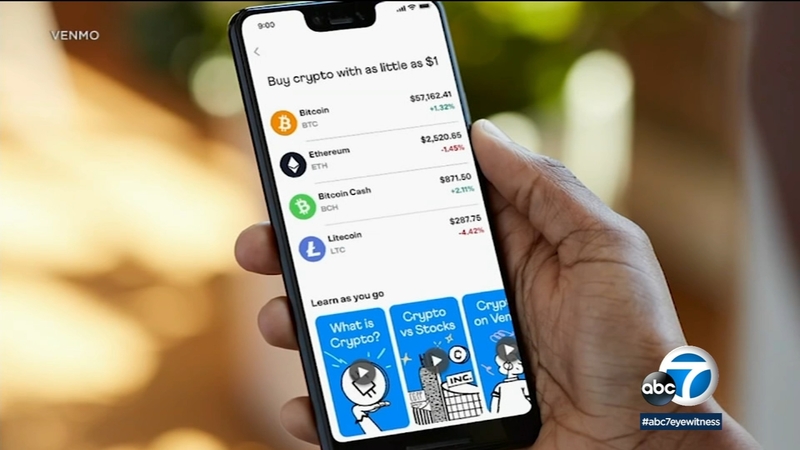 Cryptocurrency is booming, but what are the risks?

LOS ANGELES (KABC) -- Will the physical dollar soon be a thing of the past? Cryptocurrency has been around for years, and it's now more widely available for everybody. Here are some things to know before you invest.

"I think more people will get into it because it's more public. It makes people feel it's less of a risk," said Dorian Perkins of Riverside who was in Los Angeles for the L.A. Auto Show.

Brian Gilder, a Beverly Hills financial expert who advises his clients on a number of investments, said though cryptocurrencies are a hot trend, he thinks they're still quite risky.

"It's a young currency that is developing their fundamentals and when you have that combination, you're going to see volatility," he said.

Among some of the cryptocurrency players are Ethereum, Dogecoin and Bitcoin. The value of Bitcoin has fluctuated from $17,000 to $64,000 in the last year.

However, some still have mixed feelings.

"I heard about it," said L.A.-area resident Derek Cotton. "I haven't invested in it yet. I don't really trust it yet."

The dollar, the premier currency in the world, is stable and is backed by the United States. Cryptocurrency, however, exists on computers without any regulation and it's not backed by any government or authority.

"I think it definitely needs to have some regulation," said Gilder. "I think that would help make the currency less volatile, but right now there is no regulation."

The latest sign of its growing popularity is the new name for the former Staples Center, which will now be called Crypto.com Arena.

"It makes sense from the business standpoint," said Cotton. "If you're cryptocurrency and you want some relevance, nothing better than getting on the tips of everybody's tongue."

"Also understand the risks you are taking," he said. "This is an aggressive growth investment, and as long as you understand that, and you can sleep at night, then it's OK to have a small portion of your portfolio in it."

"I mean, I do have a little bit in crypto, and I'm going along to see how it goes," he said.