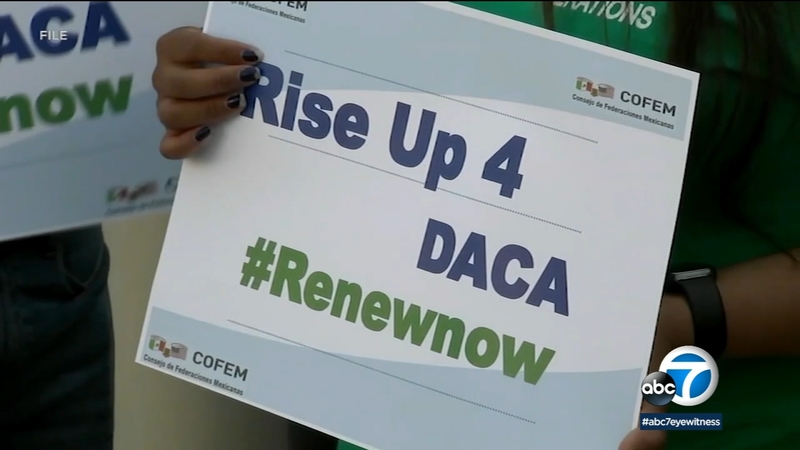 LOS ANGELES (KABC) -- The result of the presidential election is providing a sense of hope to DACA recipients whose status in this country was in jeopardy under President Donald Trump.

"Overall just a sigh of relief, just feeing like I was able to finally breathe," is how Melody, a DACA recipient, felt when she heard the election results.

She is also community organizer who feels after four years there is change in the country for immigration.

"It made me very happy to know that there is a friendlier administration," says Melody.

DACA - Deferred Action for Childhood Arrivals - was passed through an executive memorandum by President Barack Obama. It allows some undocumented individuals who were brought to the country as children to remain with a deferral from deportation and become eligible for a work permit.

Trump tried to end it but was tied up in court.

Diana Colin, political director of the Coalition for Humane Immigrant Rights of Los Angeles, says: "The support for DACA, the support for immigration reform is a bipartisan support, it has been for many years I think this is one of the issues that should be prioritized."

DACA protects about 700,000 people from deportation. Opponents feel it's not legal, and argue that Congress, not the president, should be responsible for making immigration laws.

Ira Mehlman from the Federation for American Immigration Reform says: "This is an important constitutional issue and we should determine, the Supreme Court should determine what the limits of presidential discretion is to disregard certain laws the president doesn't like."

"We want full restoration of the DACA program including advanced parole, we want new opportunities for people who have never signed on," says Melody.

Colin adds "I think it's time for a pathway to legalization, a pathway to citizenship and family reunification."

But with the Senate possibly staying in Republican hands getting to that point could mean some type of compromise to get a bill through Congress.