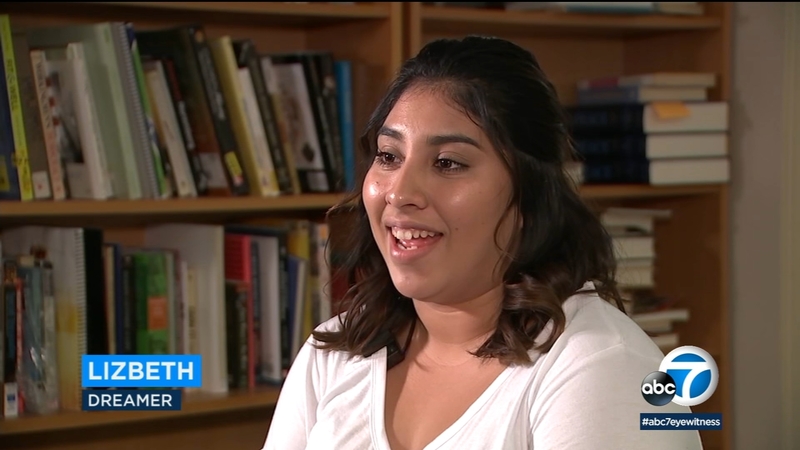 ONTARIO, Calif. (KABC) -- The only memories an Ontario woman has of Mexico are from photos and stories her parents have told her.

Lizbeth, who asked us not to use her last name, came to the United States before she could walk.

"I was one-and-a-half when I arrived to the United States. I was a baby when my parents made the decision to come to the U.S. and flee the persecution that my dad was going through," said Lizbeth.

The 23-year-old said without legal status she learned early on to be invisible.

"I learned of my status at an early age because my elementary school would go on field trips," she recalled. "I remember one time it was the San Diego Zoo, and that is when my my mom told me, 'You can't go. It is close to the border and ICE might be there."

But that all changed in 2012 with the Obama-era Deferred Action for Childhood Arrivals program known as DACA. The program required a background check and that applicants show proof of employment, enrollment in school, and active military status to get a two-year reprieve from deportation.

As a result, Lizbeth says she was able to graduate college. She now works as a coordinator for the non-profit Inland Coalition for Immigrant Justice.

"I was able to find work, get internships at my university, do research because even for that you need status. And now I am able to work here and do something I really like to do," she said.

But her status and that of 700,000 other Dreamers, as they are referred to, are in jeopardy. On Tuesday, the U.S. Supreme Court heard testimony for and against DACA after the Trump Administration ended the program in 2017.

"We don't know what the decision will be. If it is a decision to eliminate DACA, we're hoping that they give a timeline where folks can try to figure out what to do and not for them to start targeting people," said Lizbeth.

Despite the uncertain future, Lizbeth said she and her fellow Dreamers will continue to lives their lives.