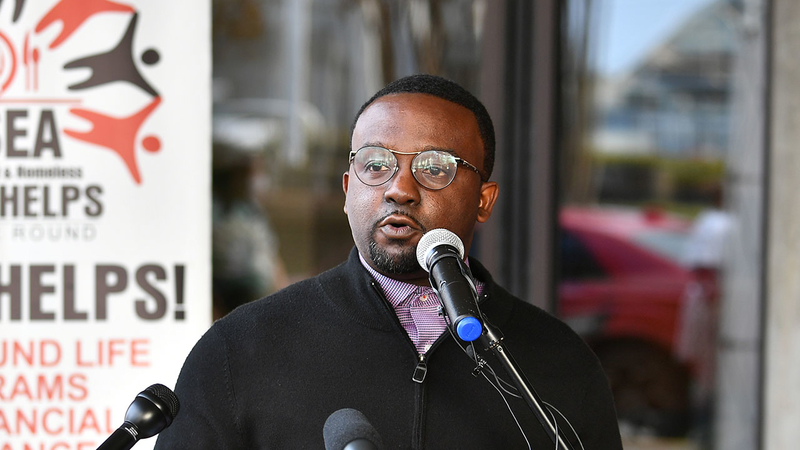 ATLANTA -- Martin Luther King Jr. Day is a time to celebrate and reflect upon the life, work and mission of Dr. King in the fight toward racial and social justice.

King's home state of Georgia was under the national spotlight this year after Rev. Raphael Warnock became its first Black U.S. Senator. At the same time, another Peach State leader is picking up the baton to continue the fight for civil rights in the spirit of Dr. King.

"When it comes to equity, it's not just about racial equity, but about environmental equity, energy equity, health equity. We have to begin to bridge those gaps, and I'm privileged to be in the position I'm in," Blackman said.

As the son of immigrants from Barbados, Daniel grew up in Columbus, Georgia, and attended Clark Atlanta, a historically black research university.

He has since become a major advocate for racial equity and environmental justice.

Last year, he wrote a book called "Nationalism Without Compassion," which he claims "looks at what lessons have we learned and where are we going as a nation." For his book, he interviewed Dr. Bernice King, daughter of Martin Luther King Jr., to discuss the moral compass of the United States and what her father would do if he was alive in this time.

Daniel's mission is to work to find ways to bring a divided nation together in efforts to work toward finding solutions to calm the civil unrest that has happened over the past year.

"We have missed many opportunities to share spaces -- whether it's Black Lives Matter and Blue Lives Matter, whether it's protests for democracy or focusing on election integrity -- we have missed numerous opportunities in this country ... I want my children to grow up in a better country than I inherited, but we have to do something about what we're seeing right now. And it has to be done with all hands-on deck" Blackman said.
Report a correction or typo
Related topics:
societygeorgiaour americau.s. & worldrace in americamlkmartin luther king jrrace and culture
Copyright © 2022 KABC Television, LLC. All rights reserved.
RACE IN AMERICA
Jackson sworn in as 1st Black woman to sit on Supreme Court
1955 warrant in Emmett Till case found, family seeks arrest
How outlawing abortion could worsen maternal mortality crisis
TIMELINE: Key events to celebrate Title IX's 50th anniversary
TOP STORIES
UPS driver, 24, collapses, dies in SoCal heat
New California laws on bars, ghost guns, schools taking effect
Newsom adds restrictions on ghost guns, marketing firearms to minors
Man graduates LAPD academy at 45 after becoming US citizen
California first to cover health care for all immigrants
4th of July fireworks in Southern California: Where to watch
Free gas giveaway leads to massive traffic jam in Compton
Show More
Broken hydrant sends water geyser over Los Feliz intersection
California gas tax increase kicks in. What you need to know
Technoblade, Minecraft YouTuber watched by millions, dies at 23
California late start law aims to make school less of a yawn
Minimum wage in LA increases to $16.04 starting Friday
More TOP STORIES News