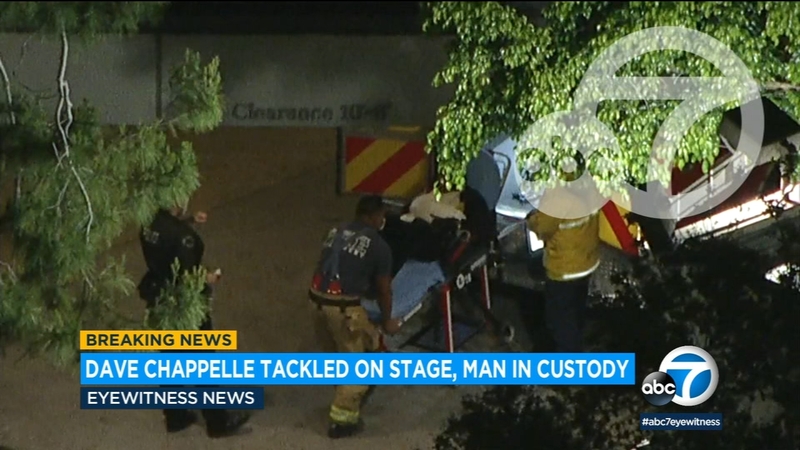 LOS ANGELES (KABC) -- Comedian Dave Chappelle was attacked on stage at the Hollywood Bowl Tuesday night by a man who tackled him during his performance.

Exclusive footage from AIR7 HD captured the apparent attacker on a gurney and being loaded into an ambulance to be taken to a hospital.

Witnesses at the show took to social media, saying that the man rushed the stage and tackled Chappelle.

According to ABC News, Chappelle and the man tussled on the stage floor before the man ran away behind a screen on stage. Security staff surrounded and tackled the man in the rear corner of the stage.

Chappelle appeared to run toward the altercation, saying the man was being "stomped." Chappelle asked repeatedly for security to remove the man from stage.

Los Angeles police confirmed to Eyewitness News that they responded to an incident at the Hollywood Bowl around 10:45 p.m. and a man who was reportedly armed with a gun and a knife was taken into custody. The man has not been identified.

It appears Chappelle was uninjured from the attack, and video posted to social media showed him continuing with the show. The 48-year-old comedian was performing as part of the Netflix Is A Joke Fest.

Comedian Chris Rock, who performed earlier in the night, came on stage with Chappelle moments after the attack and joked: "Was that Will Smith?"