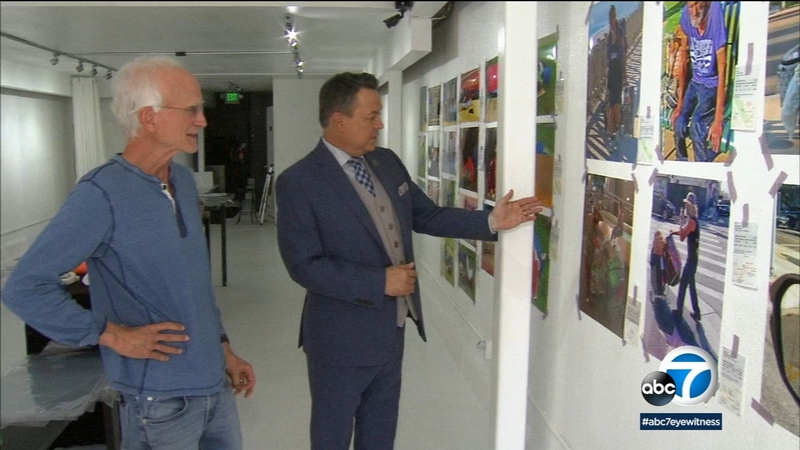 LOS ANGELES (KABC) -- David Livingston spent years in the "Star Trek" world, most notably as a producer, and sometimes director, of TV's "Star Trek: The Next Generation," "Deep Space Nine" and "Voyager."

These days, he is a well-respected celebrity photographer. But L.A.'s daunting homeless problem caught his eye and a passion project took him from the glamour of the red carpet to life on the street.

"This is the way that I can contribute to the conversation," said Livingston. "It was the only thing I could figure out to do."

"To raise consciousness about what's going on. I felt I had to do something to address the issue and this is my way," said Livingston.

Instead of using his fancy cameras, Livingston used his iPhone, so he'd be less intrusive. He spent months capturing these images for an exhibit he calls: "Still Lives: iPhone Street Photography of The Less Fortunate among Us." The photos have been taped to the walls of Exhibit A Gallery in Little Ethiopia, south of the Miracle Mile.

"The photographs are as disposable as society sees the people. So that's sort of the quote/unquote symbolism of why we did it this way," said Livingston. "The pictures are not for sale. This was an altruistic project. I'm not interesting in making money or selling the photographs."

Livingston is hoping people who visit the gallery will bring non-perishable food items, hygiene products and clothing that will all be donated to the Hollywood Food Coalition.

"We've been around for 32 years and we feed 200 or so people a night, seven nights a week, a delicious five-course meal," said John Billingsley, co-executive director of the Coalition. "And we rescue food from studios and businesses all over town. We rescue 5,000 pounds of food a week and we distribute it to other organizations."

A recent poll done for "The Los Angeles Times" found homelessness to be the city's biggest problem. 95% of respondents consider the situation serious or very serious.

What Livingston is doing is providing an artistic platform. And if that leads to people wanting to help ease the burden in some way, he feels he will have succeeded.

"This is the best project I've ever done and my heart is in this. My heart isn't over in my professional life. It's right here with these people on the street," said Livingston. "I've never felt more satisfied with doing something with the camera than with this project."