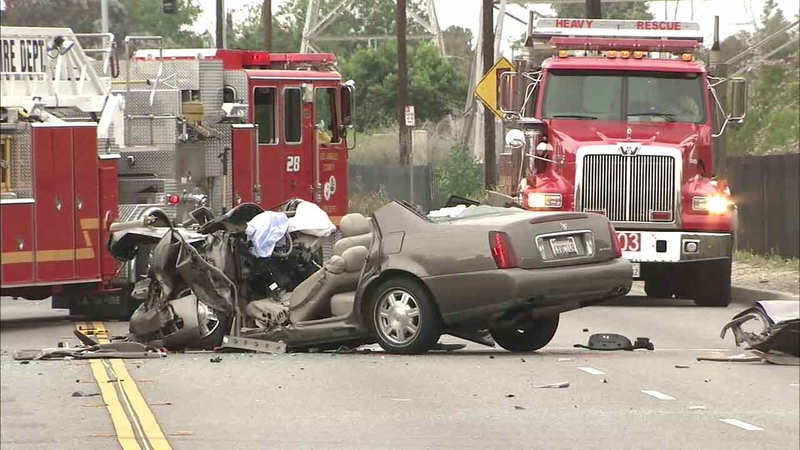 The crash between the suspect vehicle and another car carrying both victims happened just after 4 a.m. in the 5500 block of Paramount Boulevard, according to officials from the Los Angeles County Sheriff's Department Pico Rivera Station.

Investigators said both were in a Honda on their way to work at Manning Beef when the crash happened. Both were pronounced dead at the scene.

The suspect, identified as 21-year-old David Mendizabal of Whittier, was sent to LAC+USC Medical Center with life-changing injuries after his legs were crushed during the impact.
Details on what led to the crash were not immediately available, but police said Mendizabal, who was in a Cadillac, will likely be charged with DUI.

Officials were also working to determine whether Mendizabal should be charged with vehicular manslaughter.

Eloy Lara, an off-duty EMT, rushed from his home when he was awoken by the sound of the impact. Lara said he checked the vital signs of Gonzalez and Mendez, but didn't feel anything.

He then turned his attention to Mendizabal.

"I asked him, 'Are you all right? I smell alcohol. Have you been drinking?' He said 'Yes,' he had been drinking," Lara recounted.

Neighbors said the wide highway is a constant trouble spot with drag-racing and speeding. The boulevard is wide, but then comes a curve.

Many in the neighborhood refer to the stretch as "Suicide Curve."

"Residents up and down this corridor, we call it 'Suicide Curve' because the cars come screaming up the curve," Lara said. "They can't judge the corner right."

Flexible posts were installed to keep the traffic separated, but neighbors said it wasn't enough.

""Every day, I worry about my kids. I worry about everybody...the street, it is racing, it is like the way you go straight - cars like to race here and, you can see with all the yellow poles, they try to block it out and it just doesn't. People just go crazy fast," resident Satch Guillen said.
Det. Jose Marquez said speed was a factor in the fatal crash.