A major push to "defund the police" is getting support from leaders of United Teachers Los Angeles.
KABC 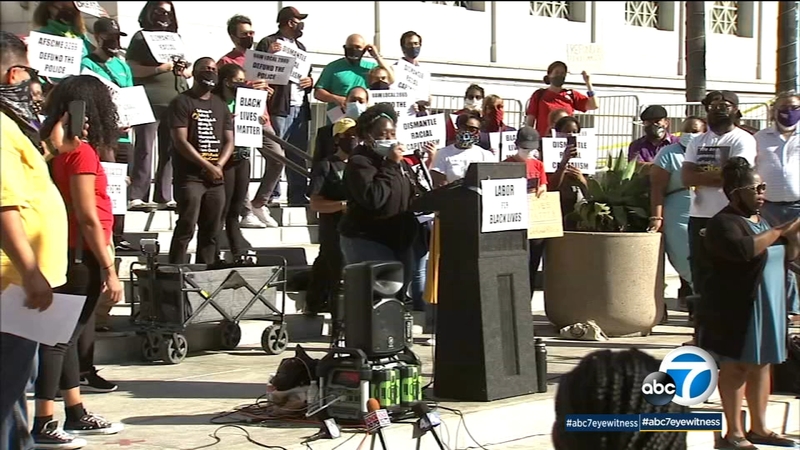 LOS ANGELES (KABC) -- A major push to "defund the police" is getting support from leaders of United Teachers Los Angeles - a movement some supporters say is a symbolic commitment to end systemic racism and shift policing priorities.

The UTLA says it supports a campaign to eliminate the Los Angeles School Police Department.

The 400-member force serves the Los Angeles Unified School District - the second largest in the country - and accounts for about $70 million of the district's $8 billion budget.

According to an ABC7 analysis of data from the U.S. Department of Education released in 2018, nearly 50 schools within LAUSD have at least one police officer, but no counselor. Over 100 schools have police but are lacking at least one of the following: a counselor, a nurse, a psychologist or a social worker.


Table not displaying correctly? Click here to open in a new window

The union's board of directors reportedly voted last week to start the process towards a larger union vote on whether to push the school board to move funds from school police to things like mental health support and academic counselors.

Meanwhile, Democrats in Congress are proposing an overhaul of police procedures and accountability after the mass protests over the deaths of black Americans at the hand of law enforcement.

The Justice in Policing Act is among the most ambitious law enforcement reforms from Congress in years. It confronts several aspects of policing that have come under strong criticism, especially as more and more police violence is captured on cellphone video and shared across the nation and the world.

The package limits legal protections for police, creates a national database of excessive-force encounters and bans police choke holds, among other changes. The changes, if enacted, would have massive implications on policing in the U.S.

It's not clear whether the legislation will pass, especially in an election year and amid calls to defund the police and growing protests. President Donald Trump has tried to set himself up as a "law and order" leader and has criticized the package, claiming Democrats have "gone CRAZY."