The suspect, identified as 36-year-old Deonte Lee Murray, was arrested two weeks ago after an armed carjacking in the Lynwood area that prompted a massive search.
KABC
By abc7.com staff 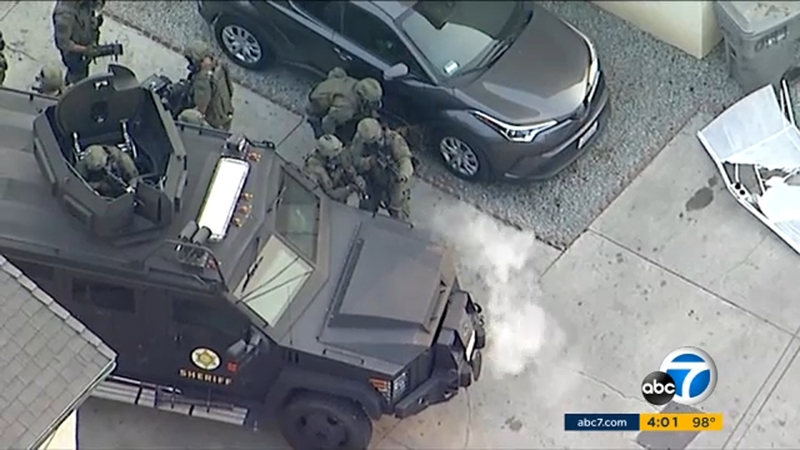 COMPTON, Calif. (KABC) -- An ex-con arrested earlier this month in connection to a carjacking in Lynwood was charged Wednesday with attempted murder in the ambush shooting of two Los Angeles County sheriff's deputies who were critically wounded while sitting in their patrol car near a Metro station in Compton.

The suspect, identified as 36-year-old Deonte Lee Murray, is set to be arraigned Wednesday at the Compton courthouse on two counts each of attempted murder of a peace officer and possession of a firearm by a felon in connection with the Sept. 12 attack on the deputies.

Sheriff Alex Villanueva said "we saw the worst of humanity -- a cowardly act where a suspect ambushed and shot and attempted to kill two of our deputies.''

"This cowardly ambush was followed by bystanders celebrating and cheering that the deputies had been shot, and that followed at the hospital -- the sanctity, the quiet sanctity of the hospital -- with protesters cheering and chanting for the deputies to die,'' Villanueva said. "These acts and that day, I will not forget it, and it represents the worst in humanity and it shocked the whole nation. And that evening, I said we will find this man. And I can report today, we have found our suspect.''

The suspect had already been charged with one felony count each of carjacking, second-degree robbery and assault with a semi-automatic firearm -- along with gang and gun allegations -- involving a Sept. 1 carjacking in Compton, in which he allegedly shot a 51-year-old man in the leg with a high-powered rifle and stole his black Mercedes-Benz. He pleaded not guilty to those charges and has remained behind bars since his Sept. 15 arrest.

An armed carjacking suspect is in custody after a massive search of the Lynwood area.

Murray, who authorities say is associated with multiple gangs, could face a potential life prison term if convicted of the charges, according to District Attorney Jackie Lacey. Sheriff's Homicide Bureau Capt. Kent Wegener, who detailed the investigation, did not suggest a specific motive for the attack "other than the fact that he obviously hates policemen, and he wants them dead."

Murray allegedly fled the scene of the deputies' shooting in the stolen black sedan and discarded a pistol while being pursued by sheriff's investigators prior to a standoff in Lynwood, according to Wegener. The pistol was the same one that had been used to shoot the sheriff's deputies in Compton and was "conclusively linked through forensic testing'' to Murray, he said.

At the time, Villanueva told multiple media outlets that there was no connection between the ambush of the deputies and the carjacking suspect, who was arrested after a chase and standoff that ended in Lynwood.

Investigators initially had no evidence that Murray -- who has prior convictions for sales and possession of narcotics, firearm possession by a felon or addict, receiving stolen property, burglary and terrorist threats -- was responsible for the attack on the deputies, according to Wegener.

"We knew that he was a violent offender, was accused of stealing a black Mercedes-Benz and lived in the area. However, there was insufficient evidence to support an arrest, much less a criminal filing for the charge of attempted murder on a peace officer and to label him in the media as the person responsible,'' the sheriff's homicide captain said.

"Additionally, bringing the public focus on him at that point of the investigation may have influenced the pending witness interviews and further compromised the mission of solving the attempted murder of the deputies,'' he said. "As the investigation progressed, we gathered sufficient evidence to substantiate not only the arrest but the filing of criminal charges in this case.''

Villanueva noted that there was also an "outpouring of support'' from across the nation, including both presidential candidates and people from all walks of life.

"Sometimes from the worst comes the best and this is an example of that,'' the sheriff said.

The deputies were shot while sitting in a marked patrol car at the Metro Blue Line station located at 275 N. Willowbrook Ave. in Compton. Surveillance video shows the gunman approaching the window on the passenger's side and firing several times at close range. The man then ran off on foot. One deputy was seen emerging from the passenger side and stumbling around on foot for several seconds before the video ends.

"Despite being critically injured, the deputies valiantly cared for each other's wounds and safety, communicated their location and plight to others, and tactically prepared for another attack,'' according to a statement from the department. "The suspect fled the scene, and a monetary reward was offered for information leading to their arrest and conviction.''

Court papers identified the deputies as Claudia Apolinar and Emmanuel Perez. The deputies graduated together from the sheriff's academy 14 months ago. They are at home recovering while Murray is held on $6 million bail.

In recent weeks, demonstrators have marched to protest fatal shootings in the South L.A. area, where deputies killed a Black man on Aug. 31 and a Black teenager in 2018.

After the ambush, a handful of protesters gathered outside the hospital where the deputies were treated and tried to block the emergency room entrance. Videos from the scene recorded protesters shouting expletives at police and at least one yelling "I hope they ... die."

The Los Angeles Police Department says an officer was not shot, as had originally been feared, but was assaulted and injured during an altercation inside its station in San Pedro on Saturday night.

An L.A. police officer was attacked Saturday night inside the Harbor Community station in San Pedro. The assailant was recorded on surveillance video as he knocked the officer to the ground inside the station, pistol-whipped him with his own gun and pointed it at his chest. The officer is recovering from his injuries.