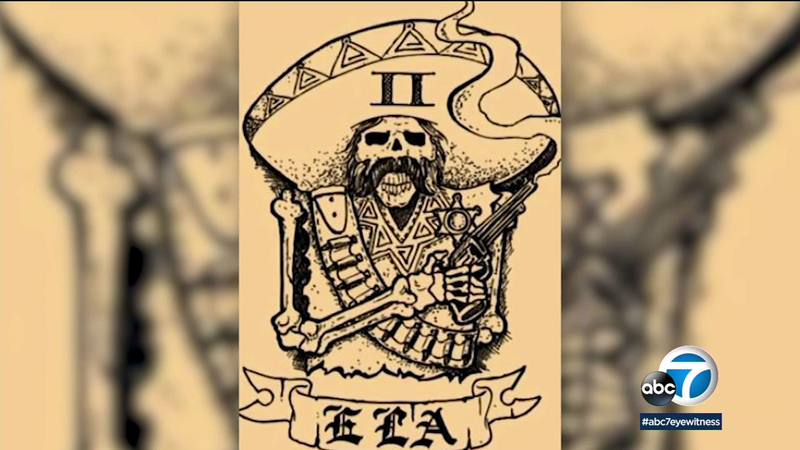 LOS ANGELES (KABC) -- Deputy gangs are facing renewed scrutiny at the Los Angeles County Sheriff's Department as the district attorney weighs potential criminal charges against members of the Banditos, a gang or clique that operates out of the East Los Angeles patrol station.

The measure follows a violent deputy confrontation at a department sponsored party at Kennedy Hall in East L.A.

A deputy who was beaten up at that party is speaking out anonymously as he and six other deputies file a legal claim alleging harassment and discrimination.

"There's people getting, you know, stomped on... being choked out... it was just crazy, crazy to believe they're all cops," the deputy tells Eyewitness News.

The deputies allege that it was a one-sided fight with younger deputies attacked by veteran "shot callers" of the East L.A. sheriff's station, a group bearing tattoos of a skeleton in a sombrero with a shotgun.

It is the Los Banditos logo.

The deputies' attorney calls the group a gang.

"Two of the four perpetrators of the Banditos who did the attacking at Kennedy Hall had been previously fired, one for domestic violence and another for filing a false police report," said lawyer Vincent Miller.

Even Sheriff Villanueva, who once worked at the East L.A. station acknowledges a bully culture. He says that that the clique came to control even the station captain.

"Pretty much they were calling the shots, they were dictating the decisions of the station and that has a very bad outcome obviously," Villanueva said.

Villanueva long ago trained a deputy who later became a Bandito. He blames supervision that eroded under pressure leading to the Kennedy Hall incident that happened weeks before he was elected.

"I can tell you exactly what went wrong -- he had a leadership team that fell asleep at the switch," says Villanueva.

It's costing taxpayers money. One lawsuit settled just last week for $7 million. In that case, a deputy accused in a deadly shooting showed his tattoo and stated that 20 other deputies at the Compton station have the same ink.

Villanueva says he advocates an end to tattoos.

"If they have the options, I would recommend they get rid of them," he said.

Questions are raised about what it would take to change a culture. Logos of former East L.A. deputy groups were displayed on a pillow at a recent celebration.

"It's got the Banditos, it's got the Little Devils and it's got the Cavemen -- the three gangs at East Los Angeles station and they're promoting that," says Miller.

Complainers can face retaliation. Some who have resisted the Banditos have seen the word "rat" written on their windshield or received a dead rat.

But the most serious threat may be to public trust and safety.

The deputy says that a Bandito power play was to ignore a call for back-up when a lower-level deputy needed help.

The deputy has since transferred but believes the Banditos are still in control.

Villanueva has replaced the station captain and transferred 36 people out of the station.

"Some of the supervisors were part of the problem, they were facilitating this and that really it made matters even worse -- it's like pouring gasoline on fire," Villanueva said.

Villanueva on Friday revealed a new policy -- the first in 30 years. It prohibits participation in any group that promotes misconduct.

The district attorney is considering whether to file charges against the deputies accused in the Kennedy Hall attack.

Despite his ordeal, the deputy says he will not let the Banditos shoot down his lifelong ambition.