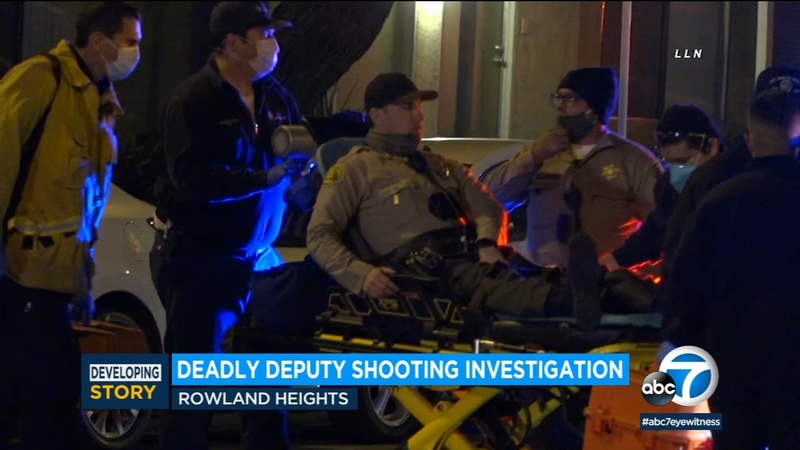 ROWLAND HEIGHTS, Calif. (CNS) -- A man who escaped capture for about 24 hours after kidnapping his girlfriend during an argument at a strip mall in Industry was fatally shot by a deputy after ramming a patrol car with a stolen SUV in Rowland Heights, sheriff's officials said Monday.

The shooting occurred about 11:50 p.m. Sunday in the 1900 block of Batson Avenue, according to the Los Angeles County Sheriff's Department.

Authorities withheld the name of the 28-year-old man, who died at the scene, pending notification of his family.

The investigation began about 10:30 p.m. Saturday at a strip mall in the 1100 block of Fullerton Road in Industry.

"There, a man and woman had an argument and she tried to leave location,'' according to a sheriff's department statement. "He then grabbed her and forced her into his vehicle and fled. Witnesses stated potentially hearing a gunshot just prior to the suspect forcing the victim into the vehicle and kidnapping her.''

According to the sheriff's department, the suspect and victim were gone by the time deputies arrived at the scene, but a firearm, ballistic evidence and property belonging to the victim were located in the parking lot where the kidnapping occurred.

"Deputies immediately searched the area in an effort to locate the suspect and rescue the victim, while awaiting investigators to assist. Ultimately, the victim was located four hours after the kidnapping,'' the statement said. She suffered non-life-threatening injuries, including abrasions to her face and lower body. She was treated at a local hospital and released.''

The name of the 24-year-old woman was withheld. She was described by the sheriff's department as "a longtime girlfriend of the suspect.''

Investigators said they learned the suspect was possibly driving a white Jeep Cherokee and issued a "wanted'' flier on Sunday morning.

At about 12:45 p.m., Industry Station deputies spotted the SUV and a pursuit ensued, but the suspect eluded capture.

Around7:45 p.m., Walnut Station deputies saw the Jeep and chased it, but the suspect got away again. Then, about 11:45 p.m., a deputy from the Industry Station was patrolling the 1900 block of Batson Avenue in Rowland Heights when he saw a white Jeep Cherokee backed into a carport parking spot of an apartment complex.

"Believing this might be the suspect vehicle, he pulled in front of the Jeep. As the deputy was exiting his vehicle to investigate, the suspect appeared in the Jeep's driver seat, revved the engine and rammed the front end of the patrol vehicle,'' the sheriff's statement said. During that time, the deputy's leg was caught underneath the vehicle pinning him, and a deputy-involved shooting occurred.''