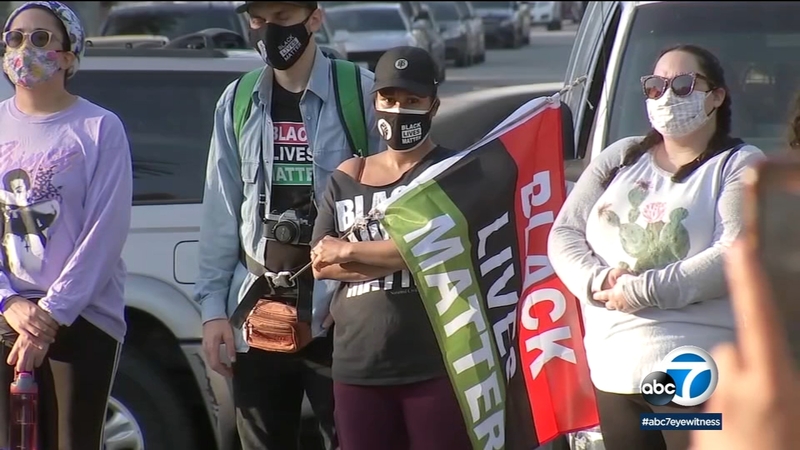 LOS ANGELES (KABC) -- A majority of Southern California political and community leaders are praising the guilty verdict in the Derek Chauvin trial even as local law enforcement agencies remain on alert for possible unrest or celebrations that get out of hand.

The Los Angeles Police Department was on a citywide tactical alert following the verdict's announcement. The department said the alert was declared as a precaution and there were no protests or unlawful assemblies underway.

"For those who will be out in the streets participating in unity and solidarity rallies and protests to fight for continued accountability of law enforcement, I ask that we do so safely and that we do not engage in negative activities," said Hilda Solis, chair of the Los Angeles County Board of Supervisors. "We want to maintain and uplift the message of justice for George's family and not steer away from it with distractions."

Solis added: "I also will ask that the LA Sheriff's Department personnel who will be out on the streets in LA County, to not engage in activities that will unnecessarily agitate those exercising their First Amendment right. We need to respect the rights of all Angelenos to protest and rally, including allowing members of the press to do their jobs in being a source of information for all of us."

By Tuesday night, all the gatherings remained peaceful.

Vaccination sites run by the city of Los Angeles were closed Tuesday as a precaution. Canceled appointments will be given priority in rescheduling.

Other agencies throughout the region had been prepared for possible trouble, particularly if Chauvin was found not guilty.

Many Southern California leaders were praising the guilty verdict in the Derek Chauvin trial as the streets remained calm amid concerns about potential unrest.

In Beverly Hills, for example, after the death of George Floyd there were protests last June that left many businesses vandalized.

With the expectations of the Chauvin verdict being issued this week, city leaders in Beverly Hills had taken extra precautions. Additional officers were on patrol, businesses were boarded up, extra cameras were installed and private security companies were also hired.

But hours after the guilty verdict, all was quiet along Rodeo Drive.

"We take the little we can get. ... It shouldn't have happened in the first place. But they're working toward the justice we want. Slowly but surely we're getting there."

Mayor Eric Garcetti said it was an emotional day for him, noting that while the verdict was just, it does not bring back George Floyd.

Derek Chauvin was found guilty in the death of George Floyd and is expected to be sentenced in eight weeks.

"For today for us to step forward, even in the midst of our pain, it's a good day. But let's be clear as I said, this does not bring back George Floyd," Garcetti said. "It does not relieve the pain and trauma we all carry with us still."

The police unions for officers in Los Angeles, San Jose and San Francisco also praised the verdict, issuing a joint statement: "Today's guilty verdict against Derek Chauvin, unanimously reached by twelve jurors, was just. Although the verdict will not bring George Floyd back, this tragedy provides all of us in law enforcement an opportunity to improve how our nation is policed and our three police unions are committed to enacting reforms that will keep all Americans safe."

Gov. Gavin Newsom tweeted: "George Floyd would still be alive if he looked like me. That must change. No conviction can repair the harm done to the Floyd family, but today's verdict provides accountability. Now, we must continue our work to root out the racial injustice that haunts our society."

Local athletes and teams were also reacting to the verdict.

Rams safety Jordan Fuller tweeted "Justice!! We took a step in the right direction today, but we have a whole lot more steps to take. Your name will always be remembered, George Floyd."

UCLA Chancellor Gene Block also took the opportunity to express the university's mission of creating justice and dignity for all. That sentiment was echoed by leaders from the UC System, Cal State System and Los Angeles Unified School District.

A group of local clergy members gathered at Grand Park in downtown Los Angeles after the verdicts in the Derek Chauvin verdict were read. They called for continued unity and justice.