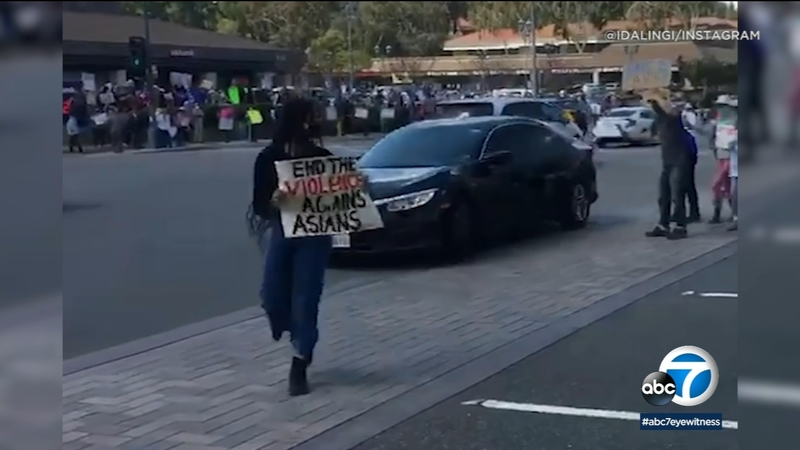 DIAMOND BAR, Calif. (CNS) -- A Diamond Bar man was arrested Thursday on federal charges alleging he disrupted a "Stop Asian Hate" rally by deliberately running a red light, blocking the path of demonstrators and yelling racial epithets at them.

Steve Lee Dominguez, 56, was charged in a federal grand jury indictment with two counts of bias-motivated interference with federal protected activities, according to the U.S. Attorney's Office.

Dominguez pleaded not guilty during his arraignment Thursday in U.S. District Court in downtown Los Angeles and was granted a $30,000 bond, prosecutors said.

According to the indictment, at the rally in Diamond Bar on March 21, 2021, Dominguez allegedly yelled, "Go back to China!" and other racial slurs at the demonstrators. He then deliberately drove his car through an intersection's crosswalk at the red light, made an illegal U-turn and cut off the route of several rally participants lawfully crossing the street, prosecutors allege.

The rally was a protest against the increase in hate crimes and hate incidents against Asian Americans and Pacific Islanders both locally and nationally -- including the murders of six Asian American women five days earlier in Atlanta.

Prosecutors said one victim at the rally was an Asian American woman carrying a sign that read, "Stop Asian Hate." Another victim was a Black girl who carried a sign that read, "End the Violence Against Asians." Another person who was cut off in the crosswalk was a 9-year-old child, and Dominguez's car narrowly missed coming into contact with her and others, according to the indictment.

A pregnant store owner in Oakland's Chinatown credits a community-donated safety tool for helping her after she was attacked outside her store.

Dominguez allegedly then pulled his car over some distance away from the intersection, got out of the car and continued to yell racial epithets and threats at the demonstrators. He then called the police, identified himself as "John Doe" and falsely reported to police that the rally participants were blocking the street and he had to run a red light because they were about to trample my car,'' the indictment alleges.

Dominguez also allegedly requested that police "get some control out" at the intersection.

If convicted of the two charges in the indictment, Dominguez would face up to 20 years in federal prison, prosecutors noted.