LA man who nearly died in crash reunites with medical staff, first responders that treated him 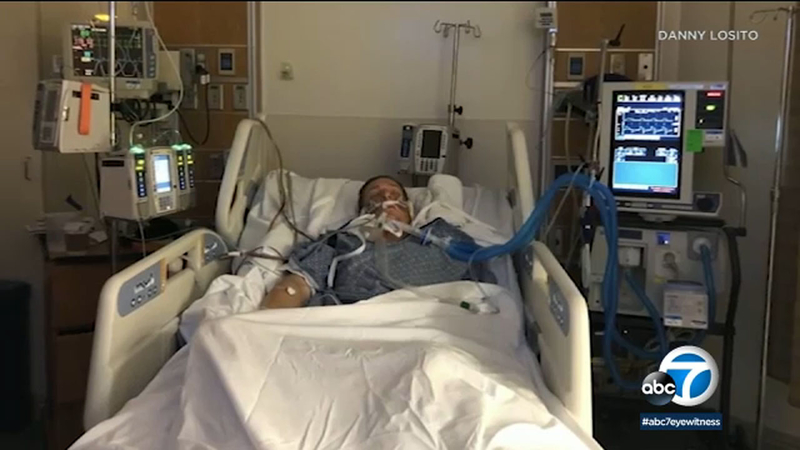 A grateful group of trauma survivors got a unique opportunity to thank the emergency medical professionals who saved their lives.

Less than a year after a horrific car crash, 28-year-old Danny Losito of Los Angeles thanked the first responders who pulled his mangled body out of his crushed vehicle.

"I was stopped at a red light waiting to turn and two cars collided in the intersection and hit me," Losito said.

On Jan. 13, Losito was just leaving his job at the Los Angeles Memorial Coliseum. A car flipped right on top of him.

"I started a couple of IV's and gave him some fluid and then we ran him over to the hospital," said paramedic Matt Moon with the Los Angeles Fire Department, who responded to the incident.

When he arrived at Dignity Health California Hospital Center, the extent of the damage became clear. Losito had collapsed lungs, a ruptured diaphragm, a lacerated spleen, a broken jaw and seven broken ribs.

Trauma physician, Dr. Scott Gaspard was there that night.

"We took him to the scanner and that's when we saw the bleeding around his spleen. And a significant amount of stomach and a small piece of small bowel up into his chest," Gaspard reflected.

The reunion comes as the hospital marks the 15th anniversary of being the only trauma center in the heart of downtown Los Angeles.

"It's great to have a centrally located trauma center right here in downtown where all of the auto-versus-pedestrian accidents can come here very quickly and everything that happens up and down the 110 corridor can get treated without a long drive," Gaspard added.

It's not everyday doctors and nurses get to see trauma victims after they've fully recovered. Losito is one of a handful of patients who wanted to meet their heroes face-to-face.

"It takes a village. I mean everybody here is somewhat responsible for all of these outcomes and it's really great to see," Gaspard said.