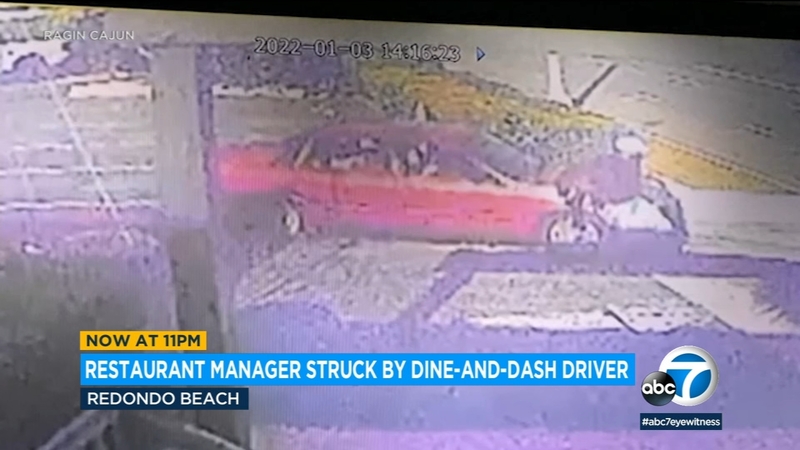 REDONDO BEACH, Calif. (KABC) -- A Redondo Beach restaurant manager was struck by a car after confronting the driver and passenger, who were accused of dining-and-dashing, in an incident that was captured on surveillance video.

According to the Ragin Cajun Cafe, the confrontation occurred shortly after 1 p.m. Monday at the restaurant in the 500 block of South Pacific Coast Highway.

The footage shows the manager standing in front of the suspects' vehicle before the driver steps on the gas, hitting the manager and knocking him onto the hood of the vehicle. The driver then makes a sharp turn onto PCH and flees southbound as the manager tumbles onto the sidewalk.

"This whole incident is just disturbing, it's upsetting," Lisa Briton-Hodges, co-owner of the Ragin Cajun Cafe, told ABC7. "Nobody deserves this. And he still comes in with a smile on his face, even after this happened. He's just a good person."

The manager suffered minor cuts and bruises in the collision.

The suspects' vehicle is described as an older-model red Chrysler or Ford sedan. The accused dine-and-dashers, a man and a woman in their 20s, remained at large.