Several members of a family are expected to sue the Dodgers after they say they were beaten by security guards because they are Latino.
KABC
By Leanne Suter 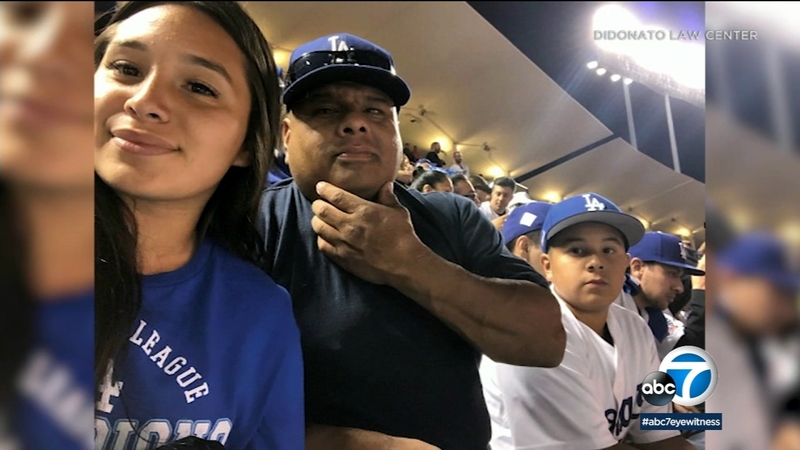 LOS ANGELES (KABC) -- Several members of a family of Los Angeles Dodger fans filed court papers Wednesday against the team, alleging they were beaten by security guards because they are Latinos.

Verdin's son, Rigoberto Verdin Jr., alleges one guard held a knee on his neck while he was on the ground, making it hard for him to breathe.

All of the Verdins are "passionate and supportive fans of the Los Angeles Dodgers baseball team,'' according to the plaintiffs.

The plaintiffs are seeking $7 million in damages.

The confrontation occurred Oct. 9 after the Dodgers season-ending 7-3 10-inning loss to the Washington Nationals in Game 5 of a National League Division Series, the plaintiffs say.

The family was leaving the stadium when they say a man near them was acting erratically. They were near an exit when they were "accosted'' and "battered'' by security guards who called them "gang bangers, thugs and homies,'' the plaintiffs claim.

None of the Verdins are gang members and they were subjected to racial profiling even though more than half of fans who attend Dodger games are Latinos, according to the plaintiffs.

Verdin Jr., 26, was trying to help his 24-year-old brother, David, who had been put in a choke hold when the guards tackled Verdin Jr. and took him to the ground, where one placed a knee on his neck, according to the plaintiffs.

"I was just in shock the whole time. It was unexpected, out of nowhere," David Verdin said during the news conference.

"I can't breathe,'' Verdin Jr. shouted as he was subsequently struck on the body and head, the plaintiffs allege.

Rigoberto Sr. suffered injuries to one hand and arm after being tackled to the ground and his daughter, 18-year-old Jamie, received a broken nose, according to the plaintiffs.

"Without warning, my clients were jumped by security. Not only were they accosted and stopped, there was no inquiry of them. They were on the ground - chokehold, knee on neck," the family's attorney, Peter diDonato, said.

Verdin Jr. and David Verdin were arrested but not charged, according to the court papers.

Their attorney says many of those working security at Dodger Stadium are off-duty police officers, including some LAPD officers who wear their uniforms while working for the stadium.

The Dodgers have refused to explain the guards' alleged conduct and ignored the plaintiffs' requests for witness statements and other information, the plaintiffs say.