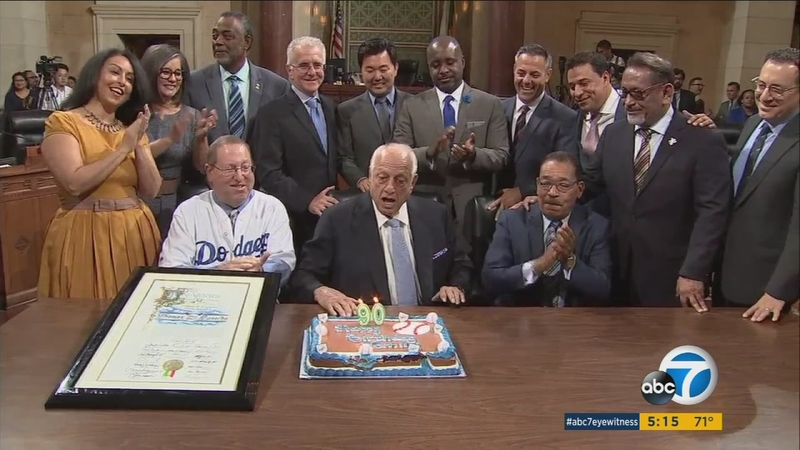 LOS ANGELES (KABC) -- The Los Angeles City Council on Friday honored Dodgers legend Tommy Lasorda with a celebration of his 90th birthday, which was on Sept. 22.

The morning ceremony was held in the council chambers, crowded with Dodgers fans who applauded the Pennsylvania native and former manager who famously led the Boys in Blue to a World Series victories in 1981 and 1988.

"We are delighted to recognize Tommy Lasorda for his significant contributions and wish him the happiest of birthdays,'' Councilman Paul Koretz said. "Tommy Lasorda has been a champion with the Dodgers and for the city of Los Angeles.''

Koretz, a lifelong Dodgers fan, described Lasorda as "baseball's most popular ambassador" who has served the L.A. community during his decades with the club.

Los Angeles City Attorney Mike Feuer noted that when Lasorda was asked what he wanted for his birthday, the former manager replied: "Another World Series win."

"Thank you for the honor," Lasorda said after he was presented with an official framed proclamation. "May God bless each and every one of you -- and if the Dodgers don't win this time, I think I'm gonna kill myself."