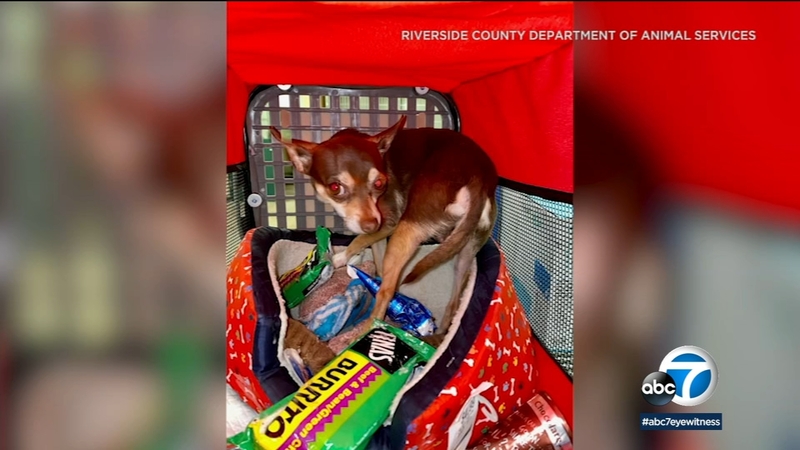 PALM DESERT, Calif. (KABC) -- A dog is safe after it was found inside a sweltering hot car in Palm Desert Thursday. Apparently, the dog kept from overheating because his owners left him in a crate filled with frozen food.

The crate the tiny 3-year-old Chihuahua was found in contained frozen burritos and ice cream, however, the food was lukewarm, according to Riverside County Animal Services.

Officials said veterinary staffers were stunned the dog was not overheated.

"It really was so bizarre that the dog was not suffering," said Emily Vialpando, a registered veterinary technician. "Upon examination, he didn't exhibit any signs consistent with heat stress."

Animal Services responded around 2 p.m. to the Living Desert Zoo and Gardens after an employee of the zoo notified them that a dog was inside a black Escalade, according to animal services officials.

The responding animal services officer measured the car's interior temperature at 104. That officer and a Palm Desert police officer helped retrieve the dog, who was then taken to the Coachella Valley Animal Campus in Thousand Palms for a veterinary examination.

Riverside County animal control officers stress the incident is not a laughing matter and urge people they should never try this.

"In all seriousness, it was about 90 degrees in parts of the Coachella Valley today, meaning the inside temperature of the car was much higher," Vialpando said. "And frozen burritos are not going to stay frozen for long when it gets this hot."