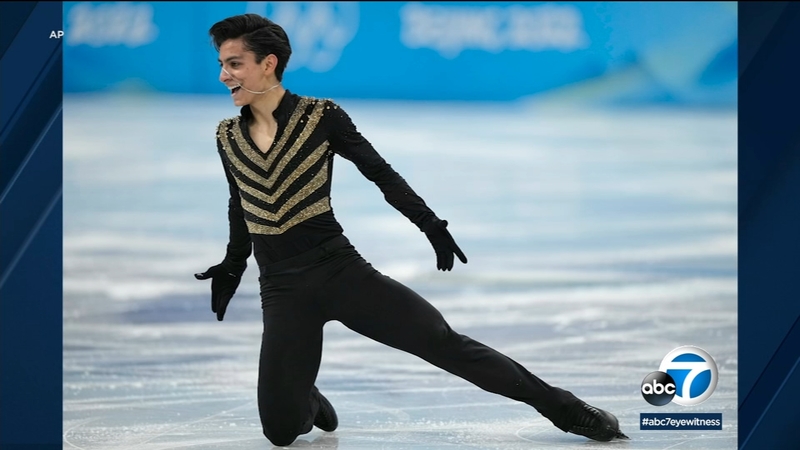 LOS ANGELES (KABC) -- Figure skater Donovan Carrillo is breaking barriers. The 22-year-old is the first skater from Mexico at the Olympic Winter Games in 30 years.

And now, he's made history as the first ever to advance to the free skate for his country. Although his time at the Olympics has come to an end, the young ice star has become an inspiration for millions and a symbol of resilience.

"I really wanted to show people that Mexico could produce a figure skater," Carrillo said. "It's something that really matches with my personality. I can express myself when I'm in the ice. I just let it go and let everything happen."

His passion for the sport began in Jalisco, Mexico at 8 years old. He convinced his father to buy him a pair of skates. The skates were used and a few sizes too big but Carrillo was unfazed.

Carrillo said he didn't care if the skates were too big, he just wanted to skate.

From early lessons to intense professional training, since Mexico does not have Olympic-sized rinks, Carrillo has always trained in a shopping mall rink.

He said that means he's had to skate during public sessions.

"I just try to silence everything and just focus in on my main goal - that was qualify for the Olympics," Carrillo said.

When he did, Carrillo immediately called his biggest supporters.

"I called my mom and she was crying and my dad was also crying," Carrillo said. "Because it was not just my goal, it was also them and all the sacrifice that we did as a family - oh my God. It was so emotional for us. It's something bigger than a medal."

Carrillo said he skated for his family and for all of Mexico, and he vows to return to the Olympics in 2026.