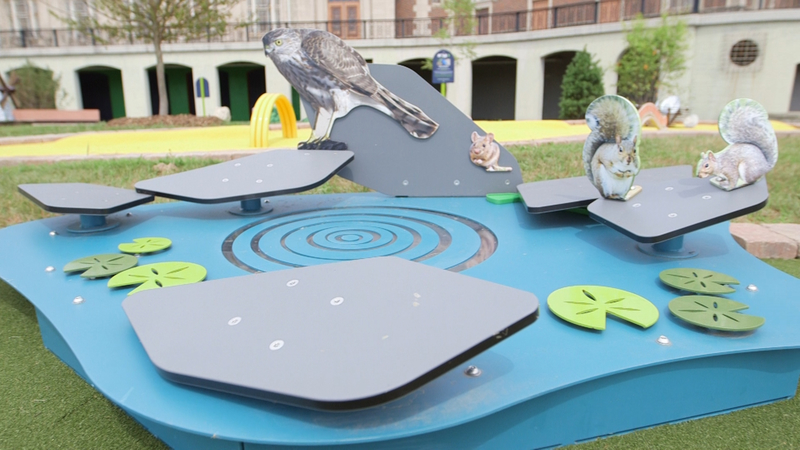 CHICAGO -- The miniature golf course located behind the Fieldhouse in Douglass Park has been there for years, but had long been forgotten.

That was until the Lincoln Park Zoo's community engagement team, along with artist Haman Cross III of Firehouse Community Arts Center and designer Eric Hotchkiss of the School of the Art Institute, decided it could use a makeover.

"I've been doing projects in North Lawndale for at least 15 years," Cross said. "I remember being asked to visit this park and see if there was a project that I could get engaged in, involved in. I ended up coming out on the patio and I noticed that there was a miniature golf course that needed some love."

Over the next three years, 40 teens and young adults from North Lawndale and Little Village worked alongside Cross, Hotchkiss and other community leaders to brainstorm obstacles. The group became known as "The Douglass 18" to represent the 18-hole mini-course.

"It just was like a perfect kind of alignment to have resources to be able to match the vision and the potential of our youth here on the west side," Cross said.

Project leaders said one of the main goals of project was to activate members in the community to get involved in renovating and beautifying their own neighborhood.

"This isn't us helicoptering in and dropping stuff in the neighborhood," Hotchkiss said. "This is the community building it themselves."

The course obstacles were inspired by the more than 200 migratory bird species that can be seen in Douglass Park.

"We started off teaching the students about birds in general and then moved into the specific species that live and migrate to the park," Lincoln Park Zoo's Community Liaison Jaeda Branch said. "After we introduced some of the different birds, each student picked their own species and decided what features they would focus on for their creative designs."

The students were in charge of all course designs. Each obstacle was researched, prototyped and tested by community members before being brought to life.

"At first we thought we was coming here just to work and get paid for it, but it actually turned out to be like an art school for us," Douglass 18 designer/contributor Jacob Sanders said. "We struggled with it, but we also learned a lot from it."

The renovated course features colorful holes highlighting the history, diet, habitat and other distinguishing features of each species.

Project leaders said the renovation is proof of what can happen when you put resources and time into working with the community.

"It's interesting how many of them said, 'I'm not an artist' at the beginning, but then designed this entire golf course," Hotchkiss said.

"When the opening day came, and to see those students step out on the course and say, 'I came up with this' and here it is been enjoyed by the community, is just a testament to what's possible here on the West Side," Cross said.