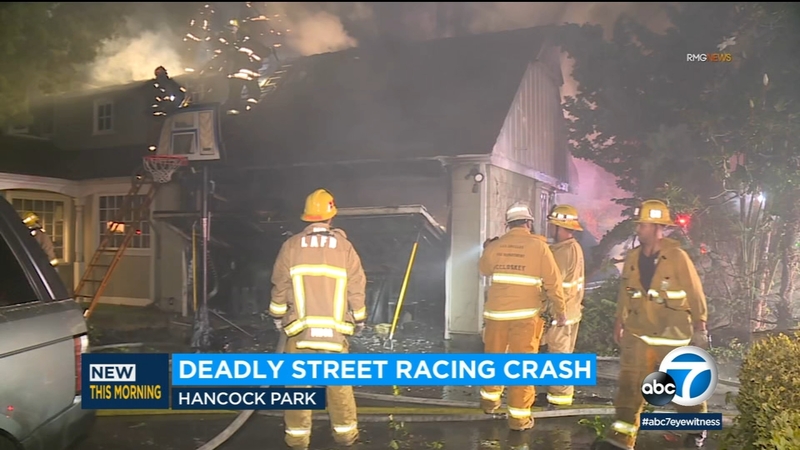 HANCOCK PARK, LOS ANGELES (KABC) -- The driver of a vehicle that crashed into a home in Hancock Park was killed, and the crash sparked a fire in an attached garage, nearby vegetation and in the attic of the house overnight. Investigators believe the driver was street racing at the time of the crash.

Crews responded about 11:35 p.m. Thursday to the 200 block of Rimpau Boulevard, near Third Street, according to Nicholas Prange of the Los Angeles Fire Department.

A knockdown was declared about 12:10 a.m. Friday, Prange said.

Witnesses says the vehicle was traveling at an estimated 90 mph when the driver lost control, hit a curb and went airborne before slamming into a tree near a bedroom of the home.

"A little girl was in a bedroom and stepped out of that room, otherwise this could have been a real tragedy,'' LAPD Capt. Brian Wendling told reporters at the scene.

The driver of the vehicle was pronounced dead at the scene.

A skid mark in excess of 300 feet was visible on Third Street in the area of the crash, Wendling said.

The name of the driver was not immediately released.

Officials say the home was yellow-tagged, with the family able to enter the house but not the garage.