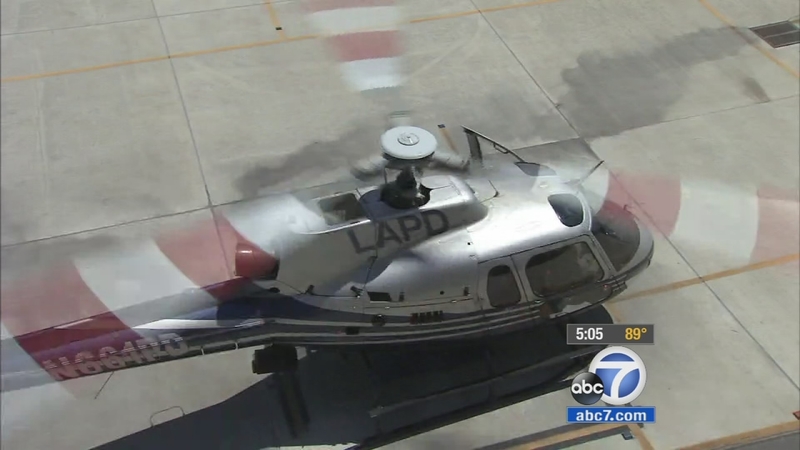 LOS ANGELES (KABC) -- A close encounter with a hobby drone forced a Los Angeles Police Department helicopter to take evasive action while searching for a suspect in Hollywood.

Police in the helicopter were conducting their search around midnight near Sunset Boulevard and Western Avenue.

Authorities say the drone swooped in within 50 feet of the helicopter, sparking an all-out search for the pilot.

"This was the first time and most egregious time where it has actually came into our airspace in such close proximity," said Capt. Al Lopez of LAPD Air Support.

Shortly after the close call, investigators found the pilot in a Rite Aid parking lot and took him into custody for interfering with police work. Officers also confiscated the drone.

"It is very hazardous," LAPD pilot Sgt. Jorge Gonzalez said. "It could kill everybody onboard the aircraft and anybody you hit on the ground. These aircrafts are just under 5,000 pounds and they can carry up to 143 gallons of jet fuel."

According to the LAPD, the pilot, whose identity was not released, was questioned and released pending the results of an investigation.

The handler will be questioned by the Federal Aviation Administration. A forensics lab will examine the aerial video the drone recorded and will determine whether the close fly by was intentional.

Pilots say collisions with even a small object can be disastrous. Earlier this month a bird struck an LAPD chopper, and it took three weeks to repair the aircraft.

Drones have also posed a serious problem in wildfire zones.

Firefighting aircraft have been hampered for making drops over fires - most recently in the Cajon Pass blaze that jumped the freeway.

There are also privacy concerns when it comes to drones. Earlier this year, a Huntington Beach resident swatted a drone out of the air after telling the operator not to fly near his home.

Lawmakers are working to clarify the rules, proposing state legislation that would make it a crime to fly private drones near wildfires and 350 feet above private property.