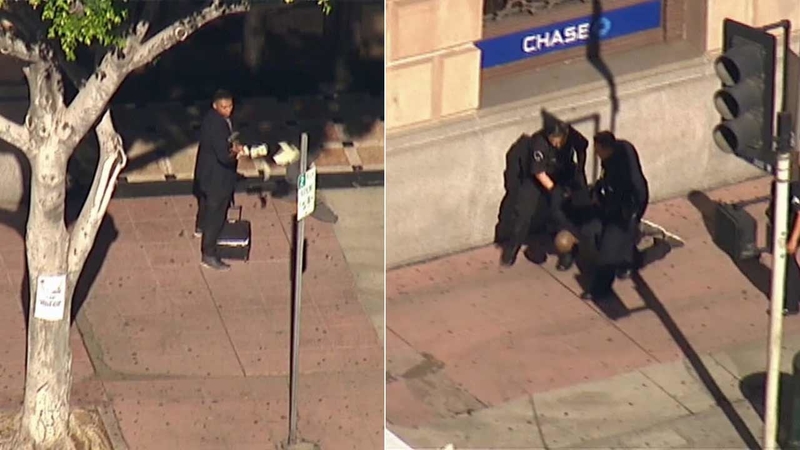 DOWNTOWN LOS ANGELES (KABC) -- A man who allegedly robbed a Chase Bank in downtown Los Angeles Monday morning was taken into custody after being shot by police with a non-lethal beanbag round.

Los Angeles police responded to the bank near W. 9th and S. Hill streets at about 9:40 a.m. after bank employees called 911.

The suspect allegedly told bank employees that he had a bomb and then demanded $250,000 in cash. He got an undisclosed amount of money.

After police were able to talk the suspect out of the bank, the incident ended a few moments later in dramatic fashion. The suspect was seen throwing money out of a suitcase before officers fired a beanbag.

"They locked us down completely," said Paul Bortoli, who was part of a production crew working down the street.

Bortoli says he heard and saw police pulling up in front of the Chase Bank and saw the suspect standing outside. He pulled out his cellphone and shot video.

"When I saw him reach into his bag I thought for sure something bad was going to happen, so it was pretty...I didn't want to see anything too graphic," said Bortoli.

Hernan Camacho is part of the same production crew. He was setting up directly across the street when he saw the robbery suspect come out of the bank.

He says people thought what was being played out at the bank entrance was part of what they were filming.

"They must just think it's all another day in Hollywood or something like that, but it was kind of crazy because we were very separate from them, and they were making sure that we stayed inside," said Camacho.

The suspect was taken into custody and transported to a hospital for treatment after being shot with the beanbag round.

The bomb squad went in to make sure the building was safe after the suspect said something after he was arrested, according to the LAPD.

"He claimed to have had an explosive in his backpack, and after he was taken into custody he said that he may have had another explosive inside," said LAPD Officer Drake Madison.