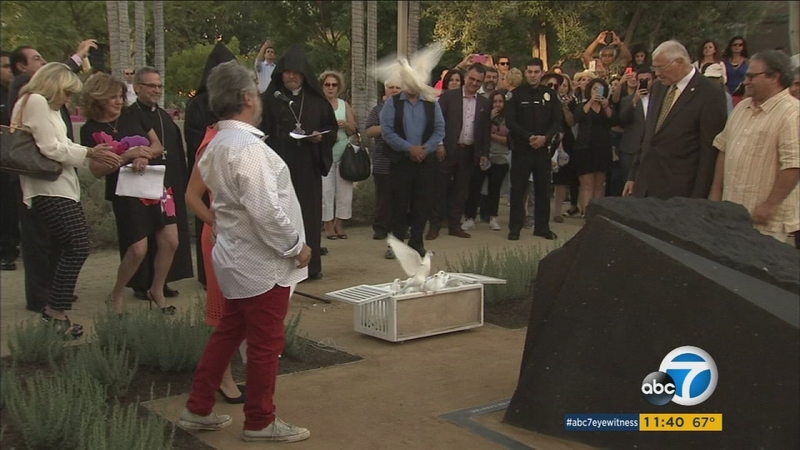 DOWNTOWN LOS ANGELES (KABC) -- A new monument in downtown Los Angeles was paying homage to the victims of one of the deadliest events of the 20th century - the Armenian Genocide.

It serves as a reminder of a dark past but also celebrates life. The massive black rock unveiled during a ceremony at Grand Park is the first monument in the city of Los Angeles dedicated to the more than 1 million victims of the Armenian Genocide in 1915.

"It's a miracle we are still here. We didn't supposed to be here. So for me, it has great meaning," said attendee Maurice Soudjian.

Hundreds gathered for the ceremony to remember what, for many, has not been forgotten.

Placed near the monument were photos of genocide survivors from a previous public art installation.

Jenny Garibyan's eyes filled with tears as she gazed at a photo of her mother, a survivor.

For relatives of survivors attending the event, the monument is a powerful tribute.

"Seeing her mom's face in last year's exhibition, and now to have that translates to a permanent monument, is very special for her," said granddaughter Lilith Garibyan.

The monument is made of volcanic rock from Armenia. One side is rough - representing the pain of genocide. The other side is smooth - symbolizing the present and the future.

Surrounding the monument were the words of Armenian playwright William Saroyan.

The quote read: "In the time of your life, live, so in that wondrous time you shall not add to the misery and sorrow of the world, but shall smile to the infinite delight and mystery of it."