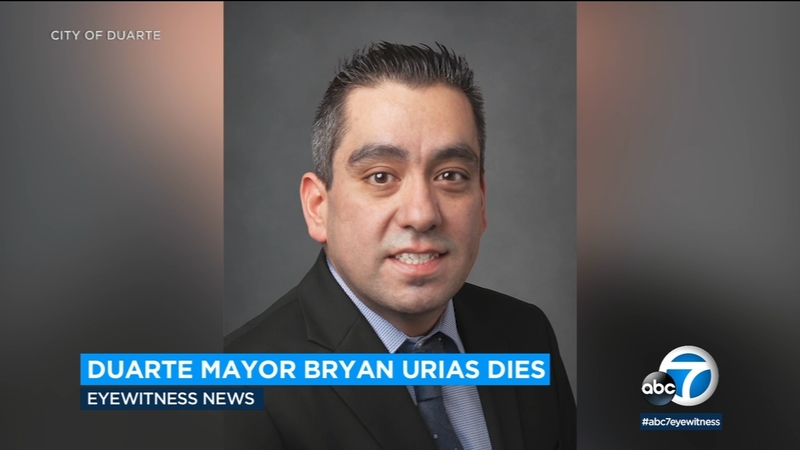 DUARTE, Calif. (KABC) -- The city of Duarte is mourning Mayor Bryan Urias, who was found unresponsive at his home over the weekend and pronounced dead at the scene.

Firefighters responded to a medical emergency at the mayor's home in the 2000 block of Buena Vista Drive on Sunday afternoon, according to the Los Angeles County Fire Department.

There was no immediate information on a cause of death.

Urias was elected to the Duarte City Council in November 2018 and became the city's mayor in December 2020.

According to the city, Urias was a lifelong resident of the San Gabriel Valley, the son of immigrant parents and the first in his family to attend college, graduating from Cal State Los Angeles. He spent time working for Reps. Hilda Solis and Judy Chu, and spent time as a board member for the Upper San Gabriel Municipal Water District.

"On behalf of the city council and city staff, our condolences and thoughts are with Bryan's family," Duarte Mayor Pro Tem Margaret Finlay said in a statement. "Bryan has a long history of public service in the San Gabriel Valley, and he brought a regional perspective and strong relationships to his role as a community leader. His experience and role in our community will be sadly missed.

"As a well-known member of our community, it is natural for the public to have questions and concerns, but I ask that we respect the Urias family by giving them privacy and space to grieve."

Plans for funeral services have not been announced.