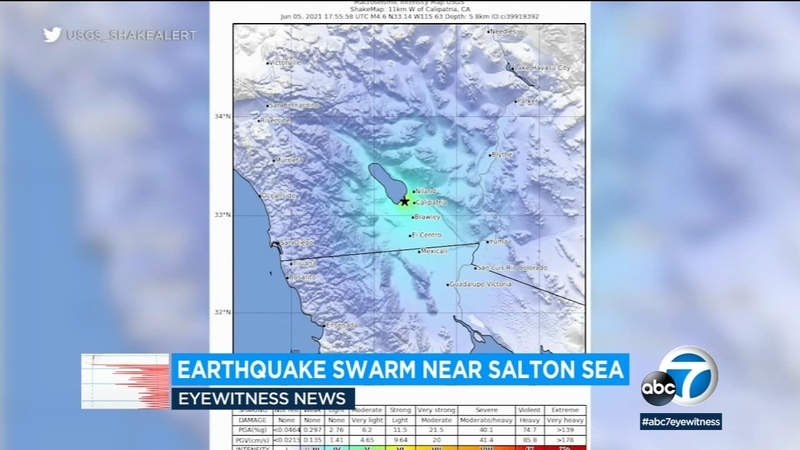 CALIPATRIA, Calif. (KABC) -- A swarm of earthquakes continued to strike near the Salton Sea in Imperial County overnight Saturday, according to the U.S. Geological Survey.

The series of temblors began shortly before 11 a.m. Saturday, with the largest -- a magnitude-5.3 quake -- occurring at 10:55 a.m. at a depth of 3 miles, the USGS said. The epicenter of that earthquake was located about 7 miles west of Calipatria and 25 miles north of El Centro, a city just north of the U.S.-Mexico border.

A magnitude-4.3 quake was also among the several dozen recorded in the area Saturday morning, the USGS said.

Good afternoon Southern California! Lots earthquakes today. Did you receive a #ShakeAlert-powered alert for the M 5.3 earthquake about 7 mi west of Calipatria (near the Salton Sea) at 10:55 am PT? Please share! @Cal_OES @CalConservation pic.twitter.com/IrFFV7ZCVN

Several hundred people from as far away as San Diego and Yuma, Arizona, reported on the USGS's website that they felt the temblor but nearly all indicated the shaking was weak.

A message from the USGS ShakeAlert early warning system was sent out 6.6 seconds after the largest quake in the swarm began, the agency said.
EMBED More News Videos

Meanwhile, more than a dozen quakes -- many ranging from a magnitude-2.5 to a 3.2 -- hit the Calipatria area overnight.

The Imperial County Sheriff's Office said there were no immediate reports of injuries or serious damage from any of the temblors.