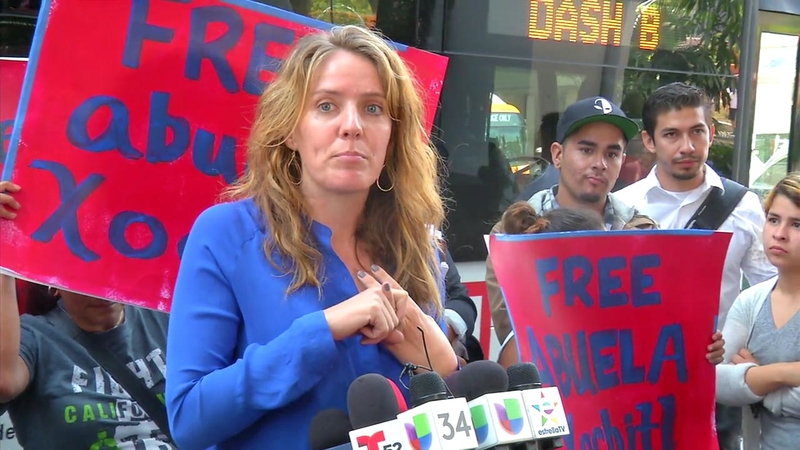 LOS ANGELES (KABC) -- Six months after a grandmother was taken into custody in East Hollywood by U.S. Immigration and Customs Enforcement agents, her family and attorneys on Tuesday reiterated their calls for the woman to be released.

According to relatives of Xochitl Hernandez, she was visiting friends when Los Angeles police served a robbery search warrant and detained her before unjustly turning her over to ICE officials.

"At the end of the day, we're all human. We all have rights," the woman's daughter, Stephanie Hernandez, said at a news conference Tuesday. "There's no way or any reason my mom should be detained."

LAPD officers were accompanied by a pair of immigration officials when the search warrant was carried out, Maclean said, "and the two ICE agents said, 'Hey, can we interview the people who are in your custody?'"

Xochitl Hernandez's attorneys said that a police officer claimed at the time that the mother of five was associated with gang members - an allegation that allegedly resulted in her detention in lieu of $60,000 bail.

"ICE has stated essentially that they can identify somebody as a priority for deportation if there is an assertion that they have some association with gang members," Maclean said.

The Los Angeles Police Department has communicated to ICE that Hernandez is not a known gang member, according to her attorneys, and should not be considered a priority for deportation.

The LAPD did not respond to a request for comment.

Hernandez's lawyers were awaiting a decision after requesting on Tuesday that she be released on a low bond or without bail.

"I feel sad because my mom isn't by my side the way she used to (be)," said Hernandez's youngest daughter, Leslie Zaldivar. "She can't help me with my homework. Sometimes in class I can't pay attention because I'm thinking about my mom."

Immigration and Customs Enforcement said it "declined to exercise prosecutorial discretion in the case and placed (Hernandez) in removal proceedings" after conducting a "comprehensive review" of her history. The agency declined to elaborate further on that history, citing pending litigation.