Protesters, police face off at Echo Park Lake before clearing of homeless encampment 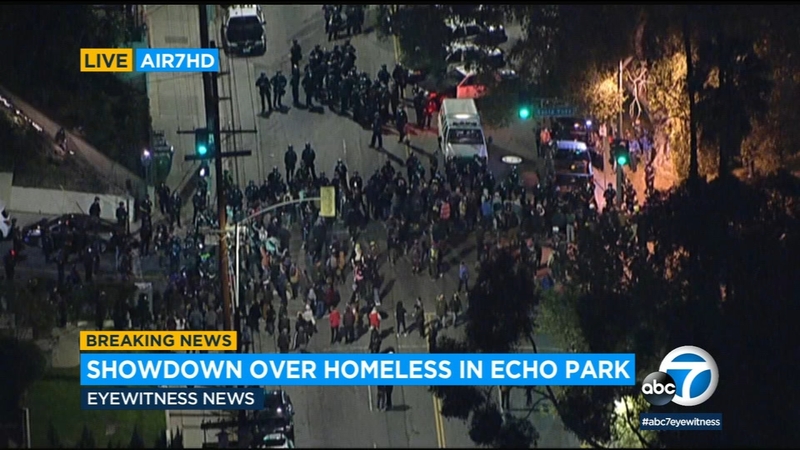 Police in riot gear formed skirmish lines and faced off against activists as preparations were underway to shut down the park.

"The Los Angeles Police Department continues to ask for calm and cooperation as the installation of fencing in support of the Echo Park rehabilitation effort continues," LAPD tweeted around 11 p.m. "Unfortunately officers have received projectiles and refusals from individuals blocking streets in the area."

AIR7 HD captured aerial footage of fireworks being set off.

The department tweeted officers were hit with rocks, bottles and smoke bombs, and denied reports circulating on social media that officers deployed tear gas. LAPD added that fencing is being installed, which was erected by Thursday morning. Those already in the park were allowed to stay overnight, but wouldn't be allowed to come and go.

Our people remain in the area around Echo Park tonight as fencing is installed. Those already inside the park in tents will be allowed to remain overnight. No one else may enter. 24 hr notice for those in the park to leave. Housing resources are being provided to everyone

LAPD descended on the area and closed nearby streets, including Glendale Boulevard and Echo Park Avenue. The Glendale Boulevard offramp on both sides of the 101 Freeway was also shut down. A citywide tactical alert was issued due to the protests.

Hundreds of advocates for the homeless gathered at Echo Park Lake Wednesday to protest plans by the city to clear a large homeless encampment from the park and close the area for what's being described as more than a half-million-dollars in repair work.

According to the Echo Park Recreation Center, the park is scheduled to close Thursday, but the time was not confirmed.

Los Angeles City Councilman Mitch O'Farrell issued a statement around 10 p.m. that "the Los Angeles Police Department was asked to support community safety efforts during installation of the fencing to assist in the rehabilitation of Echo Park.

"Department personnel are deployed in that area so that those efforts can begin in a safe and unimpeded manner. Our homeless service providers will return tomorrow morning to continue their work with the park's unhoused residents to offer shelter and services to anyone who wants and needs the assistance."

O'Farrell's office said the city is closing the park to repair more than $500,000 in damage to lighting and plumbing, removal of hazardous material and public safety improvements.

His office said in a statement that more than 120 homeless residents have been moved from encampments into transitional housing to prepare for closing the popular park with a large lake as its centerpiece. The Los Angeles Homeless Services Authority said at least 44 people were moved into shelters this week alone.

Advocates for the homeless gathered Wednesday morning to voice opposition to Echo Park Lake shutting down. They blasted the city for efforts to force the homeless out of an area that has grown into a supportive community.

Homeless residents have slept in the park near downtown for years, but tents have proliferated in recent months. The group Echo Park Tent Community said in a statement that the growing encampment has provided a secure place for homeless people during the public health crisis.

"The biggest pandemic in years actually turned out to be a blessing for us," the statement said. "Without the constant LAPD and city harassment uprooting our lives we've been able to grow... to come together as a community, not just unhoused but housed as well and work together for the mutual aid and benefit of each other."

It is unclear what action, if any, will be taken for residents who refuse to leave the park.