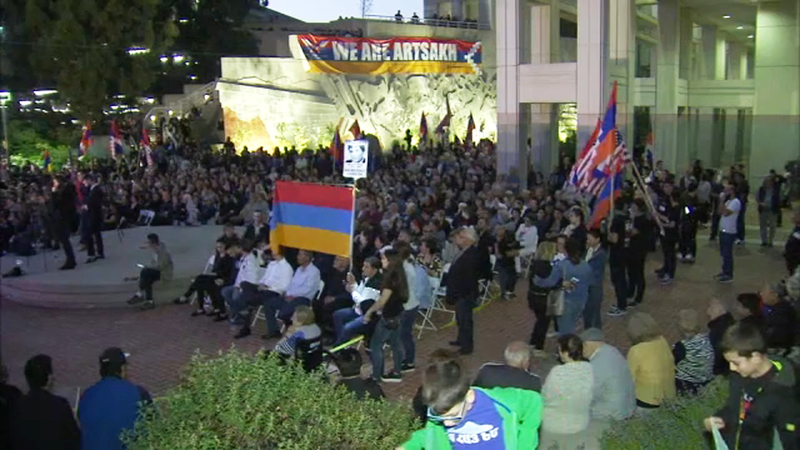 LOS ANGELES (KABC) -- The Los Angeles Unified School District board is looking to provide special recognition to the memory of the Armenian Genocide.

The board is looking at a plan to designate April 24 as Armenian Genocide Remembrance Day and possibly close schools that day.

While that day is Wednesday of this week, the plan would not take effect this year.

The district already has several "unassigned days" - which are essentially days when schools close that the district would otherwise typically experience higher absentee rates, such as the Jewish holidays and the day after Easter.

The proposal from board member Kelly Gonez asks the district to explore the idea of designating April 24 as a pupil-free or unassigned day in future school calendars, starting 2021-2022.

Her resolution asks the school superintendent to report back in 120 days on a plan to accommodate families who are commemorating the day.

The board approved the resolution, asking for a plan from the superintendent.

"Today's historic for thousands of Armenian students and families in the east San Fernando Valley," Gonez said. "Today they're seeing the board of education and the second-largest school district in the nation reflecting, commemorating and respecting their cultural heritage and the Armenian Genocide."

Gonez also notes that LAUSD schools with higher Armenian-American populations tend to have an absentee rate twice as high as average on April 24, as Armenian families participate in marches and other community activities.

The resolution also asks the district to make sure teachers are properly teaching about the Armenian Genocide in classrooms.

Historians estimate 1.5 million Armenians were killed in the Ottoman Empire, with the starting date considered April 24, 1915.

But the term Armenian Genocide remains a controversial topic. The Turkish government continues to object to the word "genocide" to describe that period in its history. And with Turkey as a key ally in NATO, the United States has not provided official recognition to the genocide.

But many state and local governments do provide recognition.

In the Los Angeles area, the day is typically marked by marches and rallies attended by thousands of people. At least two major events are planned in Los Angeles on Wednesday, one in East Hollywood and another in front of the Turkish consulate.

On the eve of the marches and the 104 anniversary of the massacre, hundreds gathered in Glendale.

"My grandparents are survivors of the Armenian Genocide," said Glendale resident Rachel Menikian. "Our grandparents and their parents have suffered the pain in silence, so they don't want to pass the trauma to the next generation."
Report a correction or typo
Related topics:
educationlos angeleslos angeles countylausdgenocide
Copyright © 2021 KABC-TV. All Rights Reserved.
More Videos
From CNN Newsource affiliates
TOP STORIES