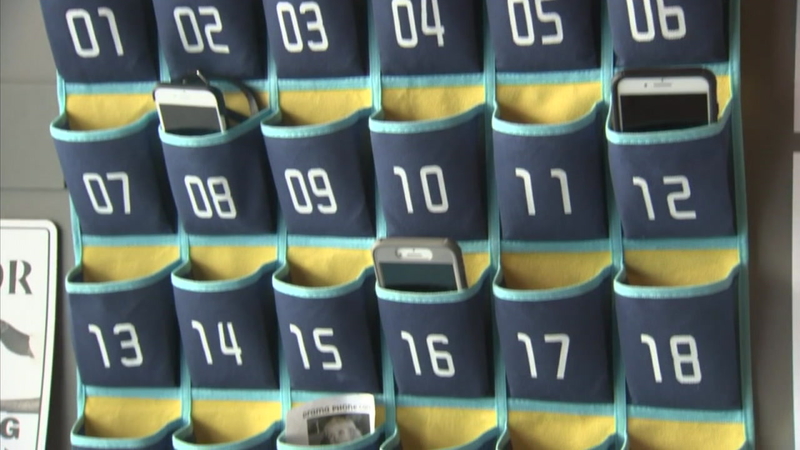 NEWPORT BEACH, Calif. (KABC) -- No cellphone use at school - it's a law that France just started enforcing at elementary and middle schools nationwide, with the hope that students will learn more and interact more with their peers.

Kids must leave their phones at home or keep them turned off during the entire school day - a concept that Corona del Mar Middle School principal, Rebecca Gogel, has been enforcing in Southern California for the last two years.

"I would absolutely love to see the United States follow suit," Gogel said. "So that students would be able to connect with each other on a deeper level, and in a more authentic way, and practice the art of face-to-face communication."

At Corona del Mar Middle School, students put their phones in classroom caddies, or keep them out of sight, and that includes during lunchtime. Students said it was awkward at first.

"Kids before would all be super quiet because they wouldn't know what to do without their phone. Now I can interact with my friends," eighth grade student Megan Schafer said. "I always worry about them looking at their phones, and I try to start a conversation, and they're like too involved in their game or looking at social media. Now, everyone's like talking to each other. People are meeting new people."

Parents also said it's had an impact on their kids at home.

"Them not using (cellphones) in school all day has made it easier at home," Jen Schafer said. "I've noticed my kids are closer than they've ever been!"

Los Angeles Unified said its students are not allowed to have cellphones out during class, or in between classes, but lunchtime use is determined by each principal.

At Corona del Mar, students who need to call home can do so at the principal's office.

Gogel said the impact the policy had on students has been great.