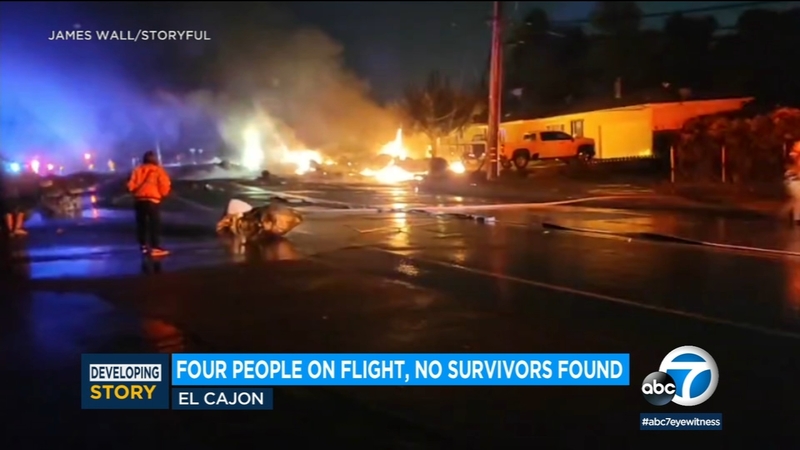 No survivors found after plane departs from OC, crashes in El Cajon

EL CAJON, Calif. (KABC) -- Four people were on board a small plane that took off from John Wayne Airport in Orange County before it crashed in a neighborhood near El Cajon Monday, and no survivors have been found.

The crash was reported at about 7:15 p.m. near the 1200 block of Pepper Drive and North Mollison Avenue in the unincorporated Bostonia neighborhood.

The area is a few miles east of Gillespie Field airport, where the plane was scheduled to land.

Deputies from the San Diego County Sheriff's Department's Santee and Lakeside stations immediately responded to the scene along with the Lakeside Fire Protection District, the California Highway Patrol and the El Cajon Police Department.

Video from a nearby doorbell camera captured the aircraft in the sky losing altitude before it crashed and caused an explosion.

An aircraft crashed in a neighborhood near El Cajon Monday evening, bursting into flames and downing several power lines.

"We felt this giant boom shake up our whole entire house. I thought it was an earthquake or like a boulder from this hill came down," said Angelina Ciampi, who lives in the area.

One home was damaged and some power lines were knocked down, but no injuries were reported on the ground, officials said.

The Federal Aviation Administration and National Transportation Safety Board are investigating the crash. The NTSB said the plane was a Learjet 35A business jet, which seats eight people.