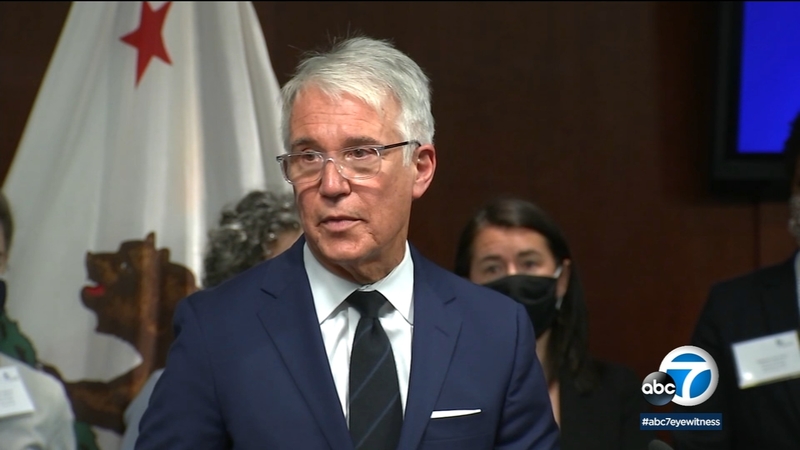 LOS ANGELES (KABC) -- Los Angeles County District Attorney George Gascón on Thursday denied reports that his office will pay the funeral costs for the suspect in the El Monte police shooting under a policy he introduced.

"Those rumors are unfounded and incredibly disrespectful to the families and colleagues of the two fallen officers," Gascón said in a statement. "We also hope people will stop playing politics with trauma and that we can all get serious about how we prevent serious violence before it begins.

The officers - Cpl. Michael Paredes and Officer Joseph Santana, who were identified Wednesday - were patrolling their shared hometown when both were slain while investigating a possible stabbing at a motel in El Monte.

The gunman was identified as Justin William Flores, authorities said. Flores was shot and killed at the scene.

Paredes and Santana - one on the force for more than two decades and the other for just months - were both were raised in and worked for the city of El Monte, a suburb of 107,000 people in the San Gabriel Valley. They became only the third and fourth officers in the El Monte Police Department's history to die in the line of duty. A vigil is scheduled for Saturday.

Law enforcement families grieving after 2 El Monte officers killed: 'That could have been my son'
EMBED More News Videos

Two days after two officers were gunned down while on duty, the community of El Monte continues to mourn - especially those with family members who work in law enforcement.

Some have criticized Gascón, saying his policies have led to a rise in crime. The DA, who is facing a possible recall election, has repeatedly defended his policies, saying his stances were well-known during his campaign and his election signified public support of his agenda.

Flores was on probation for a gun charge at the time of the shooting, which occurred a day after his probation officer requested that he return to court later in the month, court records show.