2 police officers die after being shot while responding to stabbing call in El Monte, officials say 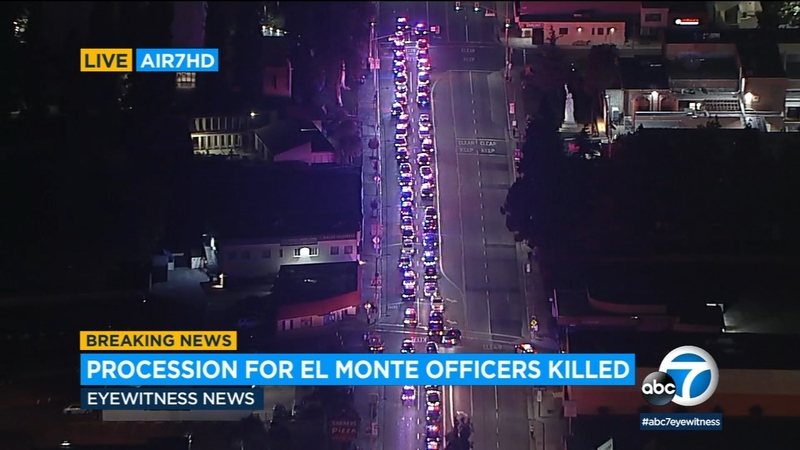 EL MONTE, Calif. (KABC) -- Two police officers have died after being shot while responding to an emergency call at a motel in El Monte Tuesday afternoon, according to authorities.

The officers were responding to a possible stabbing at the Siesta Inn and "took gunfire upon arrival," officials said.

Both were rushed to LAC-USC Medical Center where they died from their injuries.

"They were acting as a first line of defense for our community members when they were essentially ambushed while trying to keep a family safe," said El Monte Mayor Jessica Ancona during a Tuesday night press conference.

Officials say a woman involved in the initial possible stabbing call was the suspect's girlfriend and is being interviewed by detectives. She was not injured.

Investigators believe the shooting began inside the motel room, and additional shots were fired outside in the parking lot.

Detectives say the male suspect was also hit by gunfire and died at the scene.

A gun believed to have been used by the suspect was recovered at the scene, officials said at Tuesday's press conference.

Neither the officers or the suspect have been identified. However, authorities said that one of the officers had more than two decades of experience on the force, and the second officer had less than a year on the job.

An active Durham 7-year-old is on the road to becoming free of his sickle cell disease and getting back on the tennis courts and ski slopes all thanks to a bone-marrow transplant from his "superhero" older brother.

The incident happened at about 4:47 p.m. near Garvey Avenue and Central Avenue.

The area of Garvey Avenue between Santa Anita Avenue and Central Avenue is closed due to the ongoing investigation.

"There are no words to describe our grief and devastation by this senseless act as we learned about the passing of two of our police officers. It weighs heavy on our hearts and we are sending our support to their families. We would also like to thank the El Monte community and our surrounding government agencies for the outpouring support we have received in the last few hours."

"These two men were loved," he said. "They were good men. They paid the ultimate sacrifice, serving their community trying to help somebody."

"Today, they were murdered by a coward and we are grieving and that hurts," he said.

A procession began shortly after 11 p.m. as officers with the El Monte Police Department escorted the officers' bodies from the hospital to the L.A. County Coroner's office.

The Los Angeles County Sheriff's Department have taken over the investigation.

The killings came just one day after a California Highway Patrol officer was shot and critically wounded during a traffic stop in Studio City.

The 27-year-old officer was shot several times. He was in critical but stable condition at a hospital but was expected to recover, the CHP said. A suspect surrendered to police Tuesday morning in a homeless encampment in Van Nuys.