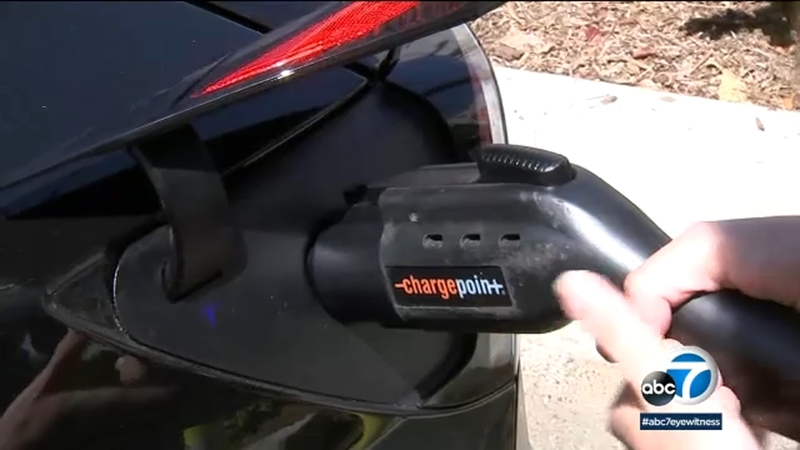 Whether it's two wheels or four, the "greening of transportation" in America continues to pick up speed and has many people making the switch to electric.

Trotta has been driving around her new Tesla Model 3 for just one week. Like many others, Trotta was convinced to make the switch from gas to electric.

"My dad has one and he loves it, he tells his friends. They're getting them. One of my older brothers has it, a lot more of his friends have been getting it," said Trotta.

The future is finally here as California continues to do their part in reducing emissions. The market for electric vehicles is booming and the infrastructure needed to meet the demand is rapidly expanding.

In the state of California alone, there are 33,000 public chargers and more on the way.

For years, there have been plans to phase out gasoline-powered cars, but the effort picked up speed with Gov. Newsom's executive order calling for 100% of in-state sales of new cars and trucks to be zero-emission by 2035.

"It is not an issue anymore especially in the big, major cities," said Carl Buena of Hollywood Electrics.

The "greening of transportation" has become the focus of this month's edition of National Geographic that declares, "The Revolution is Here."

Electric vehicle automaker, Rivian, just brought the first electric pickup truck to the market. The company's founder stated a customer drove off with a Rivian RT1 truck earlier this month.

When Ford unveiled their plans for the 2022 Lightning, its electric version of the F-150, 100,000 customers placed a reservation.

Several American truck makers including Ford, Chevrolet, GMC and Rivian are set to release fully-electric pickups trucks within the next year.

Electric vehicle motorcycle maker, Zero, can't keep up with the demand. At Hollywood Electrics in West Hollywood, virtually every motorcycle has been sold and the wait to get one can be several months.

"Fuel costs, maintenance costs in any general vehicle has finally gotten to the point where people are really looking for a better way," said Buena.

"It's not just in question anymore," Welch added. "The only question now is pace and whether or not it's going fast enough for us to accomplish whatever climate goals we want."

While there are now 12 million electric vehicles on the road globally, there are still 1.5 billion gas and diesel powered vehicles in the world.

"There's just no way to get these sales moving fast enough to meet our climate goals without some kind of financial incentive and a lot of those incentives are disappearing for some manufacturers," said Welch.