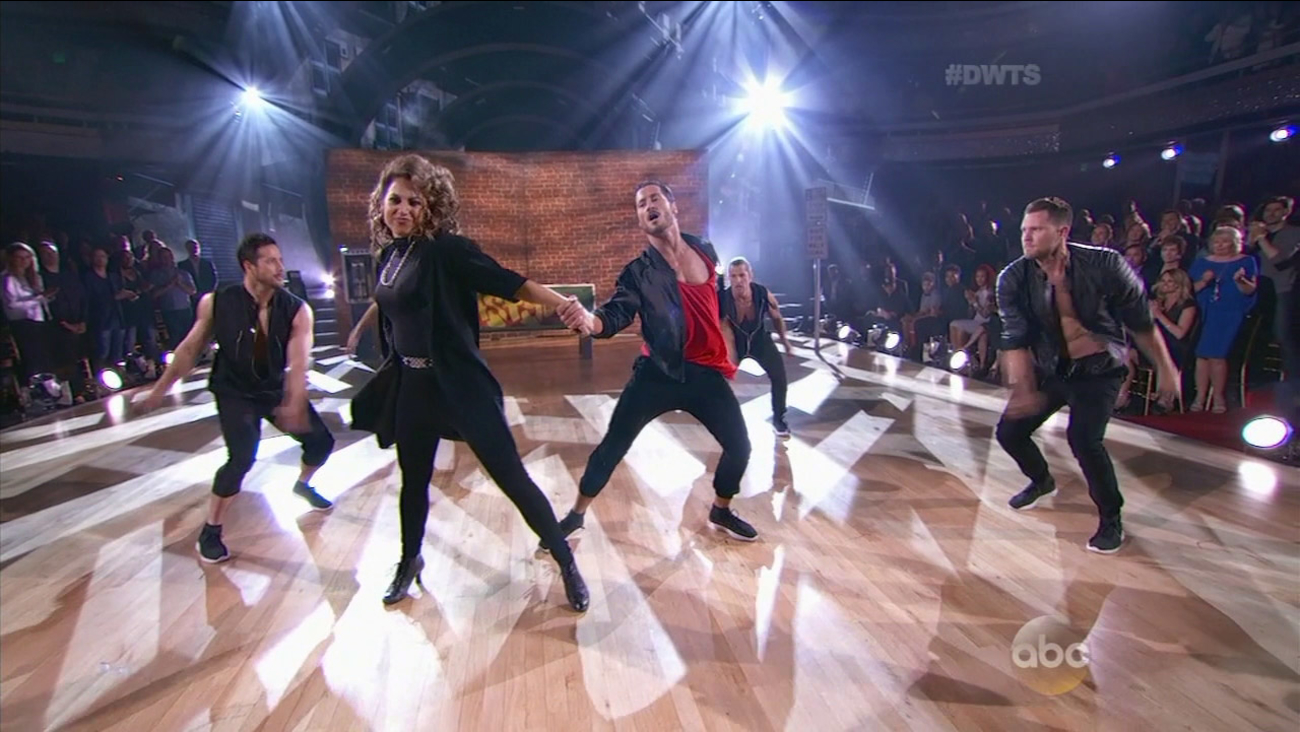 After a double elimination, six stars remain in the running for the mirror ball trophy on 'Dancing with the Stars.'

KABC
By Cari Skillman
Double dancing and double elimination means double the fun on "Dancing with the Stars." During week 7, each couple performed an individual routine and then were split into two groups for the team dance: the women on "Team Beyonce" and the men on "Team James Brown."

Here's a recap of round seven, from highest score to lowest:

Ginger Zee - 30 out of 30
Carrie Ann Inaba admitted that halfway through this Viennese Waltz she burst into tears! Tears of joy! Len Goodman said the dance was refreshing and praised Val's choreography. Bruno Tonioli thought the routine had content, style, interpretation and was her best dance yet.

Paige VanZant -30 out of 30
Bruno called their jive smoldering and almost illegal. He also praised the amount of content Mark was able to fit into the routine. Carrie Ann thought Paige channeled Tina Turner and called the dance great. Len told the fighter she was in full control.

WATCH: 360 video of "Dancing with the Stars" opening dance

Nyle DiMarco - 28 out of 30
Carrie Ann is thrilled that everyone who's left is getting serious about the competition. She thought Nyle's foxtrot was both free and elegant. Len liked it, but did complain about Nyle's "bum" sticking out a bit. Bruno thought the dance was believable and praised his dedication.

Wanya Morris - 27 out of 30
Bruno called their foxtrot as wholesome as apple pie, reminiscent of an old Doris Day movie. Carrie Ann said it's game time, and while the dance was good, it wasn't great. Len loved the whimsy and joy, but his hold got lost along the way.

Kim Fields - 27 out of 30
Bruno called Kim's samba effervescent and electrifying, and thought she was a blend of Jacksons and Mary J. Blige. Carrie Ann told Kim she brought her "A" game, and perhaps that was driven by the judges' comments last week. Len said this was Kim's best dance to date.

Jodie Sweetin - 26 out of 30
Len thought Jodie and Keo fully committed to their quickstep and didn't hold anything back; he dinged them a bit for losing hold. Bruno told Jodie it looked like she had wings and practically took flight. Carrie Ann praised their partnership and thought it came through in the routine.

Antonio Brown - 24 out of 30
Len explained the tango is a balance between attack, purpose, style and finesse and this dance had it all. Bruno liked AB's dramatic persona. Carrie Ann thought his quickness can sometimes hurt him in a dance like this but still felt he was electrifying.

PHOTOS: Behind-the-scenes pictures of "Dancing With The Stars"


Von Miller - 24 out of 30
Len likened this salsa to a pizza: crusty on the base but tasty up top. Bruno worried for Witney's safety with the lifts they used and called the dance different, but effective. Carrie Ann praised Von for going for it.

TEAM DANCES
The four remaining male celebrities sure "felt good" dancing to James Brown music. Len gave kudos to the group for learning their personal dance, along with this group number. Same for the women who got a little "crazy in love" with Beyonce. Len revealed here he has no clue who's going to take the mirror ball trophy this season.

In Jeopardy: Kim and Sasha, Von and Witney, Wanya and Lindsay.