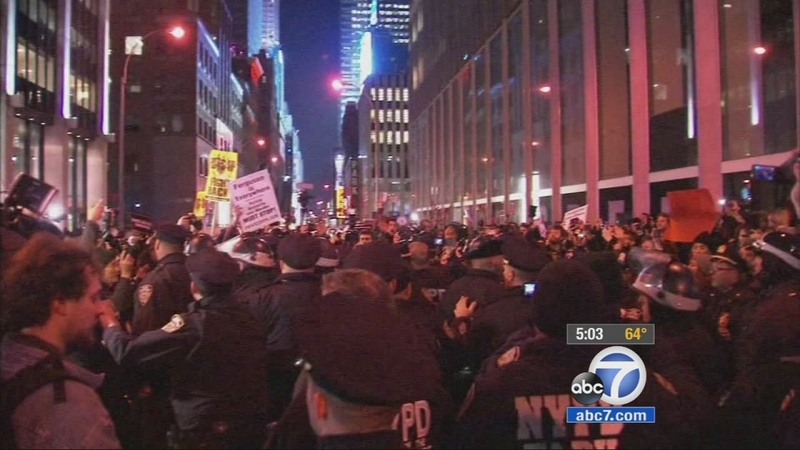 NEW YORK (KABC) -- Thousands marched in the streets of New York City, Chicago and elsewhere Thursday night in a second night of protest of a New York grand jury decision not to indict a police officer for the chokehold death of a Staten Island man in July.

There were some arrests and traffic disruptions during Thursday night's demonstrations and marches in Manhattan.

More than 83 people were arrested in New York amid massive protests Wednesday night into Thursday morning following the announcement of the grand jury decision not to indict NYPD officer Daniel Pantaleo in the death of Eric Garner.

Further arrests were made Thursday night on the West Side Highway; others found themselves in tense confrontations with police when they took over the Staten Island Ferry Terminal at Whitehall. The exact number of Thursday night arrests was not immediately released.

Police closed down the entrances to the Brooklyn Bridge on the Brooklyn-bound side Thursday night as many of the protesters began marching over the bridge, but later reopened it. Police also closed the outbound Holland Tunnel.

Garner, a father of six, died after being put in a chokehold by police as officers tried to arrest him for selling loose cigarettes. The incident occurred in July, and cellphone video shows Garner gasping, "I can't breathe," as Pantaleo, who is white, put him in a chokehold.

Despite cellphone-recorded visual evidence and a medical examiner's ruling that the chokehold contributed to the death, a Staten Island grand jury decided Wednesday not to bring any charges against Pantaleo.

Hundreds were marching in Chicago Thursday night, and there were some skirmishes seen between protesters and police officers. There were no immediate reports of arrests.

PHOTOS: Protests continue across US over Eric Garner decision 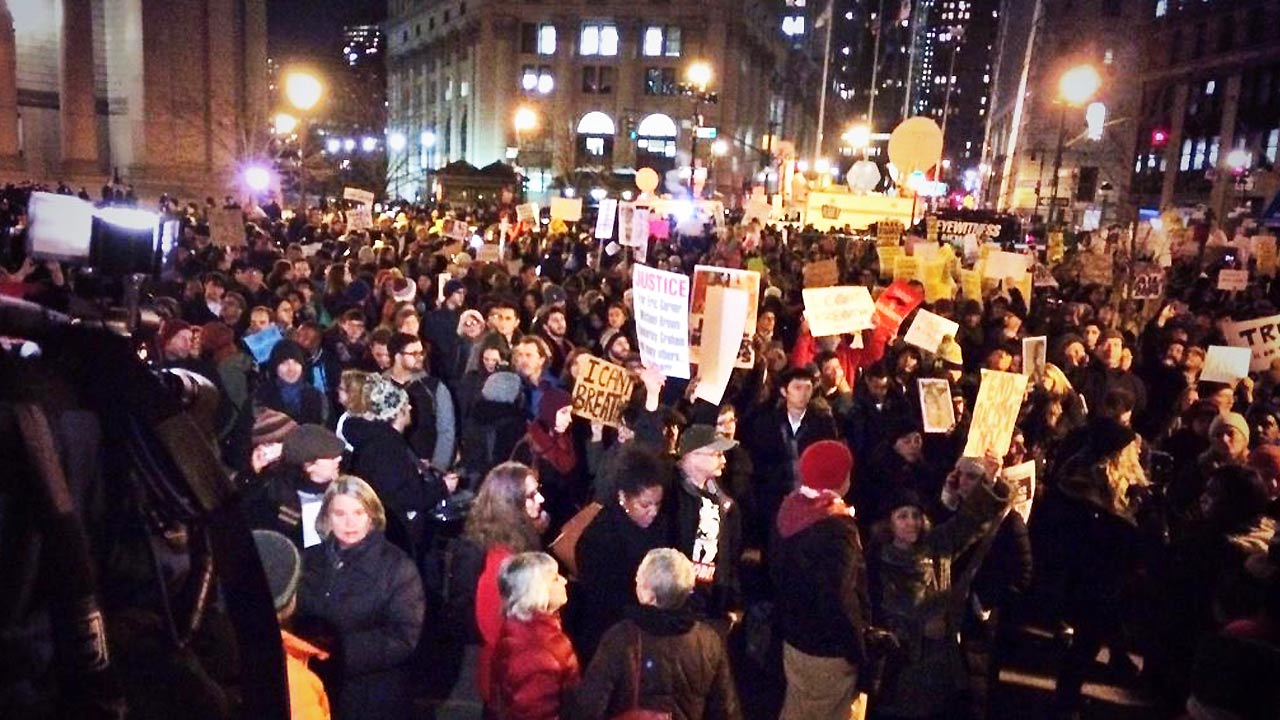 PHOTOS: Eric Garner protests continue for 2nd night
Protesters marched in city streets across the US for the second night after a grand jury decision not to bring charges against an NYPD officer involved in the chokehold death of an unarmed man was announced Wednesday.

People were marching toward Soldier Field in Chicago, where a Bears football game was in progress.

Some roadways were blocked and traffic was affected. In the 8 p.m. hour in Chicago, marchers managed to block Lake Shore Drive in both directions. By 9:15 p.m. the roadway had been cleared of pedestrians.

VIDEO: No indictment for NYC police officer in chokehold death of unarmed man 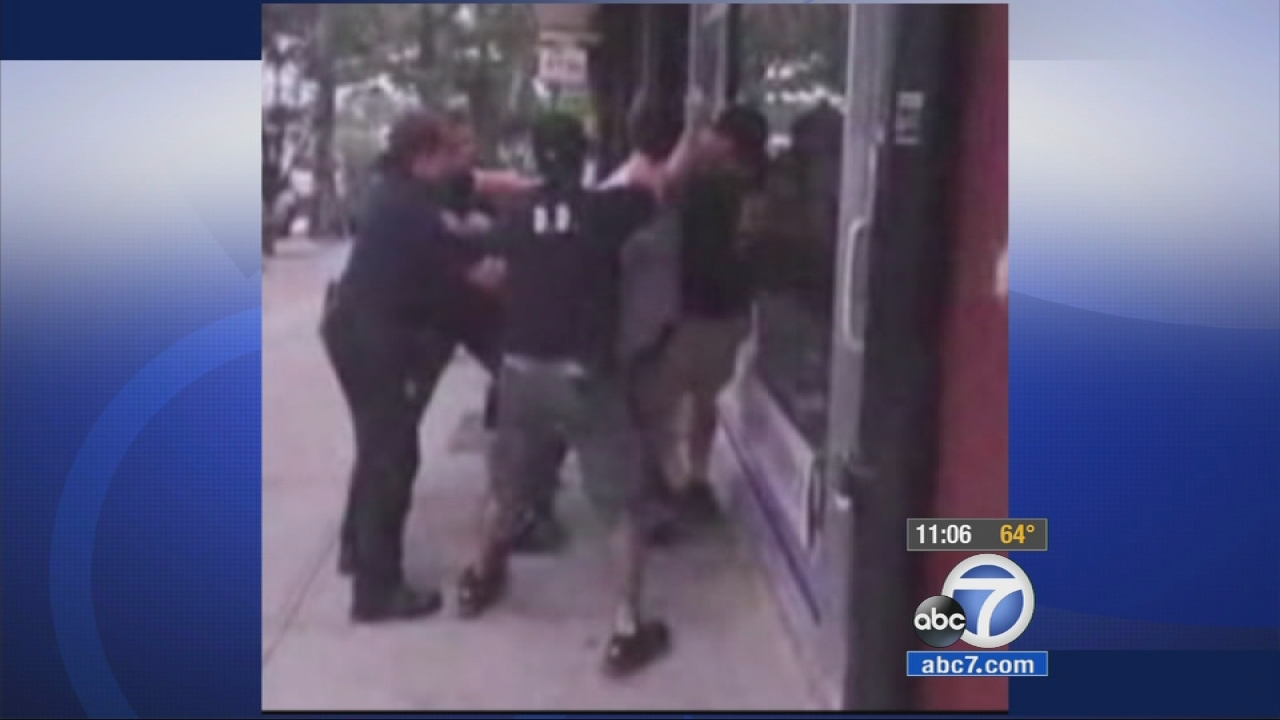 No indictment for NYC officer in chokehold death
An NYC grand jury has declined to indict a white police officer in the chokehold death of an unarmed black man in July, according to the attorney for the victim's family.

New York Police said demonstrations overnight were mostly peaceful, and most of those arrested were expected to be charged with disorderly conduct. No officers were injured. There were no reports of major vandalism along the protest routes.

Staten Island District Attorney Daniel Donovan said the grand jury found "no reasonable cause" to bring charges, but he gave no details on how the panel arrived at its decision. The grand jury could have considered a range of charges, from reckless endangerment to murder.

A judge on Thursday granted Donovan's request to allow the release of limited grand jury material. The information released does not include any evidence presented, only the following details:

--Jurors sat for nine weeks
--Testimony was heard from 50 witnesses
--Those witnesses included 22 civilians and 28 cops, EMTs or doctors
--There were 60 exhibits, including videos, records and photos
--The grand jury was instructed in law regarding physical use of force

Only the information Donovan asked for permission to release is contained in the report. The request "does not seek the release of transcripts of grand jury testimony or exhibits."

Attorney Eric Holder said Wednesday that federal prosecutors will conduct their own investigation into Garner's death.

Pantaleo expressed condolences after the ruling.

"I became a police officer to help people and to protect those who can't protect themselves," he said. "It is never my intention to harm anyone and I feel very bad about the death of Mr. Garner. My family and I include him and his family in our prayers and I hope that they will accept my personal condolences for their loss."

At a news conference with the Rev. Al Sharpton, Garner's widow said the fight wasn't over.

"No I don't accept his apology. He still feeding his kids, and my husband is 6 feet under," she said.

Garner's mother said she was "truly disappointed" in the grand jury's ruling. Speaking to protesters, she said, "We want you to rally but rally in peace."

President Barack Obama said the decision underscores the need to strengthen the trust and accountability between communities and law enforcement. While not commenting on the decision specifically, he said there are "too many instances where people just do not have confidence that folks are being treated fairly."